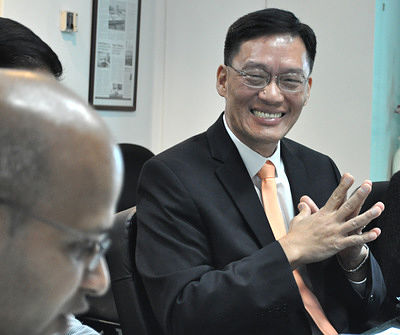 Francis Chang, CEO of RH Petrogas. NextInsight file photo.RH PETROGAS HAS reached a major milestone at its Yongping Oilfield in Fuyu 1 Block in China.
The company which is engaged in the exploration, development and production of oil and gas resources, said the drilling of 15 development wells at the site was completed by end-2014 as planned.
Drilling had started on 17 November 2014, producing encouraging results with "producible pays" interpreted in 14 out of the 15 wells.

The wells will begin production once the winter season is over.

RH Petrogas plans to drill another 40 to 100 shallow development wells in 2015.
The drilling follows the receipt of the final approval of the Overall Development Plan (“ODP”) by the National Development and Reform Commission (“NDRC”) of the People’s Republic of China for the phased development of the Yongping Field.
Mr Francis Chang, CEO of RH Petrogas, said, “We mobilised our resources to commence and complete the drilling of 15 development wells and achieved this within a short period of time after receiving the final ODP approval in October 2014.

"This demonstrates the readiness and preparedness of our team in China despite the challenges posed by the cold winter conditions at the field locations. We will continue to build on the strengths and capabilities of our team and work towards delivering on the ODP program in 2015.”

Recent story: RH PETROGAS to start production of oil in China in early 2015

We have 197 guests and no members online