"HK Housing Market To Fall up to 15% This Year" 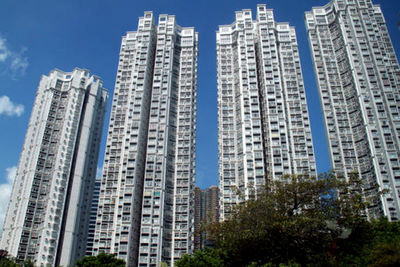 Over the next two years, with the exception of fast-growth suburban developments like Tin Shui Wai (above) and Tseung Kwan O in Hong Kong’s New Territories, the city’s overall housing price climate will face downward pressure from a general state of oversupply. Photo: newscchouse

The high-flying residential property sector could be coming down even further to earth this year, with the analyst saying housing prices could decline by as much as 15% in 2012.

This would be big news for Hong Kong’s stock market given the heavy weighting that real estate plays have on the bourse’s benchmark Hang Seng Index.

In a report on the Special Administrative Region’s housing market, RBS said prices would likely go south this year by anywhere between 10-15% and that investing in physical assets like residential units was a much better bet going forward than actually investing in the developer themed shares on the Hong Kong Stock Exchange.

After all, low prices for apartments and homes were good for buyers, but not necessarily for property firms’ share prices. 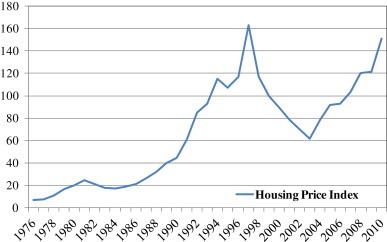 The sector report added that over the next two years, with the exception of fast-growth suburban developments like Tin Shui Wai and Tseung Kwan O in Hong Kong’s New Territories, the city’s overall housing price climate will face downward pressure from a general state of oversupply.

It also said that politics had little to do with things as no matter who ended up winning the current campaign to be the SAR’s chief representative, policies being promoted by all parties point to a continued strategy of supply-side growth which would likely deflate home prices by 10-15% in calendar year 2012.

Cai Jianguo of RBS added in the report that due to several major contributing factors, residential units will offer either limited of negative returns in Hong Kong over the next three to four years.

This can only result in property prices being fundamentally unable to keep up with increases in inflation over the period.

The factors for this phenomenon include continuous increases in supply hitting the housing market, with the government openly stating its desire to bring between 30,000 and 40,000 new residential units onboard between now and 2014.

Also, the global economic outlook, while displaying a few modest upside surprises in some regions, still remains quite anemic on the whole with mortgage interest rate hikes expected following any further economic stimulus packages from Washington, and fund flow from the PRC in the local market will slow with the promise of diminished returns a growing reality.

Cai adds that if the sovereign debt crises in the European Union worsen significantly this year, then we could even be looking at a 20-30% dive in Hong Kong residential property prices.

Barring that unlikely outcome, home prices should get a slight boost in 2013 from expected interest rate adjustments, but the resulting growth will be slower than the market is accustomed to.

He suggests investors therefore begin moving money out of the property sector and put it in more growth-based sector stocks as well as vehicles offering fixed rates of returns.

But if investors insisted on playing the property market, Cai said the best bet would be to wait until a tapering off of new units hitting the market occurs, or focusing on locations with prime access to the growing subway and light rail system become known -- such as Island East, Mid-levels West and Central Kowloon -- before making their move.

We have 590 guests and one member online