China's second reason for upping tariffs is its need to fund more and larger water treatment plants to cater for a sharp population growth.

City planners commission water infrastructure with its huge investment cost to last at least half a generation.  The concession period granted to the likes of Asia Environment for operating BOT plants is at least 20 years.

Asia Environment is among a handful of Chinese companies licensed to design and build mega-scale water infrastructure.  Wang notes the attractive economies of scale enjoyed by large projects.

One trillion yuan has been earmarked by China’s Ministry of Construction for building wastewater treatment plants and upgrading water distribution infrastructure in China by 2010.  A third of this budget is for some 278 cities where there are no proper wastewater treatment facilities.

“Demand for new projects will always be there,” says Wang, who sees the industry growing until infrastructure for water amenities reaches First World standards.

Asia Environment has established itself as a BOT water infrastructure investor, builder and operator

There are risks involved in BOT projects, such as the project delays that happened to Asia Environment in 2004 during the construction of its first two BOT projects.

The experience has made the company emphasise the securing of pre-requisite legislature approvals and funding partners, and deploying sub-contractors.

Construction work on the company’s Nantong and Pizhou plants are on track for completion by year-end.  BOT projects in Jiangxi (Jingdezhen) and Hunan (Wangcheng) are likely to be completed by 1Q08.

Wang estimates that combined water tariffs in excess of RMB 100 million are payable by the Nanchang, Nantong, Pizhou, Jiangxi and Hunan municipalities to the company’s first five BOT plants next year.

After 2004’s revenue dip due to project delay, Wang is committed to delivering stable revenue.  Collecting tariffs from supplying fresh water or treating sewage is one way.  Tendering for projects of varying sizes is another. 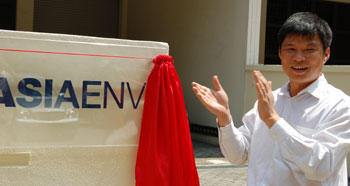 Expanding overseas: CEO Wang Hongchun at the opening ceremony of the company's new Singapore office in Kaki Bukit this month.With a strong track record, the company is more confident than ever of penetrating new geographical markets.

The company’s maiden overseas foray, announced in April 2007, was a US$38 million tender for a turnkey effluent treatment plant in Bangladesh.  Joint bidder, Development Construction Ltd, is an established infrastructure contractor in the nation with a population of 150 million.

Even with the lowest bid in the Bangladesh project, Wang expects to see better gross margins than for similar China projects.  After all, he is bringing technology to a nation thirsty for solutions to water contamination issues similar to China’s.

Wang enjoys first-mover advantage doing so.  With help from the likes of him, Bangladesh now requires its textile and tannery plants to use a central effluent treatment plant instead of disposing effluent into rivers.

We have 687 guests and no members online