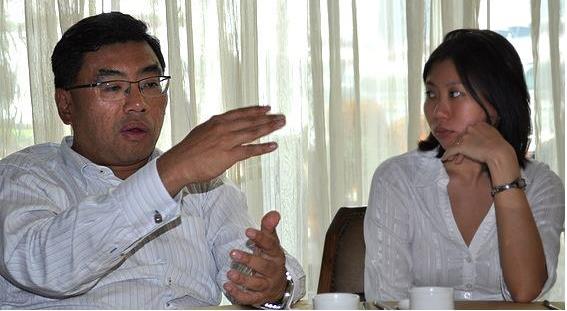 Kuah Boon Wee, CEO of MTQ, at a lunch briefing last Friday for analysts and the media. On the right is Joan Ng, a senior writer with The Edge Singapore. Photo by Leong Chan Teik

MTQ Corporation’s two operating divisions performed better in FY11 (ended March 2011) – a key result which shared the limelight at a lunch briefing last Friday along with updates on MTQ’s greenfield venture in Bahrain. 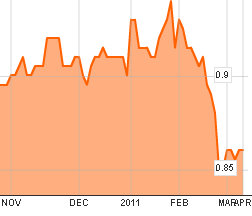 At 86 cents, MTQ stock trades at 7.1X last year's earnings and slightly below its NAV of 87.9 cents.

After touching a 52-week high of 94 cents in late January this year, MTQ stock has corrected to 86 cents following political unrest in Bahrain and some parts of the Middle East and Africa.

To questions from analysts and the media, MTQ CEO Kuah Boon Wee said his company's Bahrain project, which cost US$20 million and was two years in the making, has been physically constructed, and its equipment commissioned.

In the light of the political situation in Bahrain, MTQ has kept staffing to a ‘minimal’ level of 25, he said.

There are unspecified modest start-up losses booked in FY11 – while MTQ has begun to record some revenue last month (April), he added.

The political unrest in Bahrain has had some impact on MTQ's state-of-the-art facility which provides engineering, repair and refurbishment services to oilfield equipment used in oil drilling operations.

Mr Kuah said: “We are right next to the main power station, but they have not connected us to the grid. It was supposed to have been done at end-Feb.”

It has been a 2-month delay owing to a slow-down in the provision of basic services as demonstrations against the ruling regime took place. 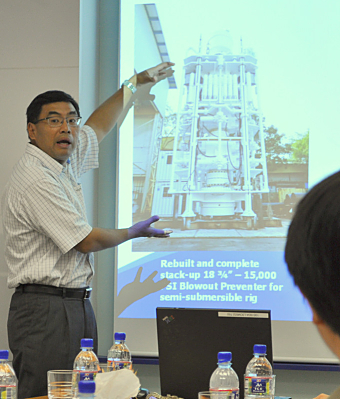 Mr Kuah explaining the workings of a Blowout Preventer, which is part of oilfield equipment that MTQ services. He was speaking during a visit by NextInsight readers to MTQ last year. NextInsight photo.

“What has also affected our business is, during the peak of the demonstrations some oil majors relocated their executives out of the country. Some of these people were supposed to inspect our plant and put us up on the vendor list.

"But now, it’s ongoing and it will take some time to run through as there is a lot of certification to be done.”

Operating profit at MTQ’s other division, the Engine Systems Division, grew by 45.9% on a 20% y-o-y rise in revenue, mainly driven by acquisitions made in the year and organic growth.

This is MTQ’s business of supplying turbocharger and fuel injection parts and services in Australia.

Although both operating divisions performed better, the Group’s overall profit after tax decreased by 11% y-o-y to S$10.7 million.

The reasons: the inclusion of a S$1.9m one-off gain on disposal of financial assets in FY10 and a S$1.2 million adverse movement in the fair value of financial instruments between FY10 and FY11.

Excluding this, the FY11 group profit after tax would have been 19% higher than that of FY10.

MTQ proposed a final dividend of 2 cents a share, unchanged from the previous year. That brings the total payout for FY11 to 4 cents a share, compared to 3 cents previously.

MTQ: Interesting Insights into its business for investors