5 key reasons why I decided to get vested in this company.

1.) Turnaround in Core NOPAT in Q3

While NOPAT for Q3 was minimal at $197k, this compared favorably against losses of ($338k) in the previous year. Furthermore, NOPAT for this quarter was disrupted by the completion of non-performing divestment which they recorded a loss of $2.5m in this quarter. Excluding this one-off, NOPAT for this quarter would have been at $2.6m positive, which would translate to about $10.4m annualized under normal circumstances.

They have also made a $0.7m provision for the restructuring of the headcount for the Neptune segment that will contribute lesser from a salary overheads point of view.

This result is not one-off spectacular in this quarter as it further confirms the thesis in Q2 where the oilfield segment has seen improving margins and business volume coming back in. 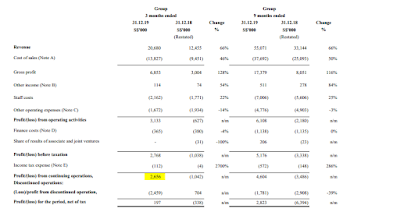 When MTQ announced its takeover offer for Neptune in Oct 2012, the Aussie subsea engineering company was incurring losses.

While it turned around and boosted MTQ's earnings in FY2013, margins was visibly lower due to the higher base of costs of goods and also higher headcount and capex required to maintain the operations. Since then, it has been struggling and pulling the Group's result downwards as demand and margins plunge and the company has been looking for alternative since to pull this segment back into profitability or divestment of this segment.

In Mid-2019, the company entered into agreement to divest its 87.1% stake in Neptune Marine to MMA Offshore Limited for $5m cash consideration + share consideration as determined by the VWAP agreement.

What this agreement says is basically the shares consideration will depend on how the share price of MMA offshore performs 30 days upon completion. If they are doing well in the market, then the implied value will be worth more. If not, it will follow the prevailing agreed implied value in the table below.

As of completion, the share price of MMA Offshore is somewhere in the 0.16 cents region, so it is likely that the company will get the lowest amount of shares consideration at 67.6m shares at A$13.5m implied value.

As of Nov'19, management has also informed that the Blossomvale residue entity will be entitled further A$2m for fixed asset and working capital adjustment, in addition to the above agreement.

This is a company that traded above $2 in its peak days.While we might never see oil back at $100 soon, and thus the company going back to their glory days of $2, I think we might see oil prices going back to mid $60s after the coronavirus situation is over and demand is back to normal. 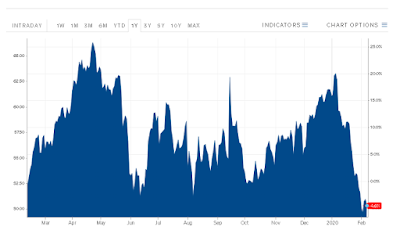 If we assume normal BAU operating profits of $2.6m per quarter for their oilfield engineering segment moving forward, this would translate into approximately $10.4m annualized or 4.8 cents earnings per share.

At 27 cents, this would translate into 17.7% earnings yield or a PER of 5.6x. I think this is ridiculously cheap given the company's turnaround fortune and history of building up this company.

The company also has a strong record of generating positive operating cashflow, even during FY2016 to FY2019. Operating cash flow before working capital tends to gyrate between $3m to $4m in each quarter, which translates to above 15% FCF yield annualised after capex.

These are 2 separate things here but both a catalyst on its own.

First, I think the company would reinstate its ordinary dividend payouts this year as the company looks like going into the black this year for the first time since 2015.

With forward earnings yield coming in at base 4.8 cents and FCF yield at double digits, we are likely to see the company resuming its dividend payout minimally to 50% at an absolute of 2 cents from FY2021 onwards. At the current share price of 27 cents, this would translates to about 7.4% yield.

Second, the divestment of the Neptune segment is likely to benefit existing shareholders in terms of special dividend or dividend in species.

The management has guided that upon completion of the divestment (in Nov 2019), the consideration shares will be distributed pro-rate to shareholders of Neptune as soon as completion and shareholder's approval was done after the AGM. This is likely to be announced together with the final ordinary dividend in their Q4 and full year results in May 2020.

At $11.5m, this translates to about 5 cents / share, and might be the next catalyst to propel the company share price further in the next 3 months once they announce this in their full year results, subject to shareholder's approval.

At an expected conservative 1.5 ordinary dividend + 5 cents worth of special dividend / dividend in species, this would translates into a total of 6.5 cents dividend for FY2020, which translates to 24% dividend yield at the current share price of 27 cents.

This is a one-off due to divestment, so we are likely to see the dividend yield tapers off to a more reasonable yield at base payout from next year onwards.

Still, I think at forward earnings multiple of 5.6x and a potential bumper dividends to come in the next 3 months, we might see a turnaround in the share price (as it already did since the start of this year) and this positive development might further propel the company into the right direction.

For longer term investors, you are likely to see the company embarking on potential M&A to propel the company's growth but with their recent failed M&A, I think this is pretty much a black box until the management can gather sufficient confidence from its investors.

The company has 15.4m warrants at an exercisable price of 22 cents, 5 years from the date of issuance which they issued back in 2018.

P.S: Author is vested in this core position at 27 cents as of writing.

This article was first published in A Path to Forever Freedom

We have 254 guests and no members online