CFO Lim Kai Ching presenting at the 3Q15 briefing last Friday. Photo by Reyna Mei
UNI-ASIA HOLDINGS, despite a challenging shipping market, would have delivered a handsome 9M2015 bottomline if not for fair value losses on its ships.

But the shipping market continued to be depressed in 3Q2015, resulting in Uni-Asia having to recognise further fair value losses.

Though non-cash in nature, the fair value loss was big vis-a-vis the operating profit of US$6.9 million.

In fact, the fair value loss on the ships of US$1.61 millon in 3Q dragged the 3Q bottomline (attributable to shareholders) into the red to the tune of US$1.3 million.

As a result, the 9M profit attributable to shareholders was US$2.7 million, down 10% y-o-y.

While the capital values of the ships dropped, and with a sustained market recovery not on the cards in the near-term, their charter income continued to rise -- as the fleet expanded. 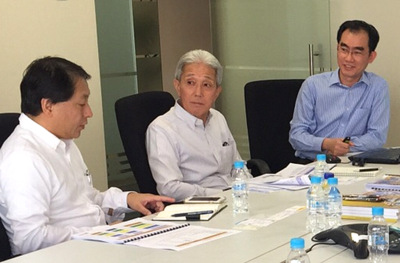 Aside from strong charter income, Uni-Asia did well in its property business in Japan. Realised gains on its hotel and property investments amounted to US$1.58 million in 9M2015 while realised gains on small residential property developments stood at US$525K.

There's even more upside next year: While Uni-Asia has only 2 residential projects completed this year, it will have six next year -- starting from Feb 2016 till Aug 2016.

Similarly, next year will also see one more hotel  -- the 238-room Hotel Vista Sendai -- starting to contribute to the group when it opens in spring.

Uni-Asia's hotel operations recorded a US$330K net profit in 3Q on higher average room rates, accounting for the bulk of the 9M profit of US$466K.

The 3Q2015 Powerpoint materials are here.

We have 859 guests and one member online