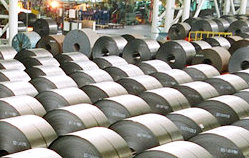 Just four short years ago, Angang Steel's HK-listed shares were trading at over 25 hkd. Now they're at around 4 hkd.
Photo: Ansteel

WE ARE TAUGHT to study history as well as learn from our own mistakes.

Business schools often urge us to study the successful firms and learn from their examples.

But there is also merit in looking into the biggest losers when earnings season rolls around every three months in China.

Here are the top three bourse busts so far this year.

Thanks to the very unfamiliar sight of slowing growth and slumping demand for building materials at home in China, Angang’s January-September top line fell 16.3% year-on-year to 58.4 billion yuan.

As a sign that things are not even close to improving, the steelmaker’s third quarter revenue fell 18.8% from a year earlier to 19 billion yuan.

But the pain doesn’t end there.

Angang placed the bulk of the blame on a weak market for steel products with a murky outlook for the sector.

It said that despite its best efforts to cut costs and improve efficiency, the sharp drops in selling prices for finished steel were too much to bear and resulted in even larger-than-anticipated losses.

It's hard to do worse than the struggling A-share market (above), but three steelmakers have tried their best to do so

Angang has been issued a warning of possible delisting by the Shenzhen Stock Exchange as any listco reporting losses in consecutive financial years is a possible candidate for expulsion from the bourse.

Investors should be very wary as Angang reported a loss in FY2011 and it is very unlikely that the steelmaker will be able to right the ship for the current calendar year.

It’s been productive to a fault – overproductive in fact – and has been burdened with an excess inventory problem.

The current Year of the Dragon has done little to breathe fire into its steelmaking furnaces, with the net loss over the first nine months standing at 3.1 billion yuan, and Maanshan was 1.2 billion in the red in the third quarter alone.

Despite gradually decreased output this year, the company still had a crippling inventory sitting idle, worth some 14.1 billion yuan by midyear.

It probably comes as no surprise that the third worst performer in a financial sense so far this year is also a steel play.

We have 1560 guests and no members online