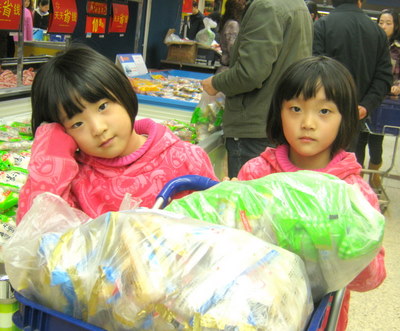 Future Investors?   Many newcomers to China's share markets have known nothing but bearishness these past few years.
Photo: Andrew Vanburen

WHEN TIMES ARE TOUGH, it is only human nature to seek blame everywhere but in our own actions.

It is fair to ask, is the struggling A-share market in China the fault of an immature body of listcos?

Or is it due to the inexperienced behavior of shareholders?

People have said that A-share firms are immature, and are the bane of Chinese investors’ existence.

Others have blamed A-share investors themselves for over-speculation, and then again for mindless, sheep-like, herd-mentality share trading practices.

Still other skeptics have pointed to the system itself as flawed and lacking in both regulatory oversight and accounting transparency.

Regardless, there seems to be a lot of finger pointing going on – an activity that clearly rises when share prices do not.

So who’s to blame for the decidedly bearish Year of the Dragon in China’s capital markets?

The benchmark Shanghai Composite Index – the go-to tracker of A- and B-shares listed in Shanghai and Shenzhen – is down nearly 16% from year-earlier levels.

And with 2012 drawing to a close, perhaps the current Year of the Dragon should be renamed the Year of the Bear – if such an animal existed in China’s zodiac calendar.

The Shanghai bourse was reestablished in its current form in 1990, and over the past 22 years, the current downturn is by many measures the longest bear market seen since by investors in A-shares.

For many newcomers to the world of Chinese equity investment, a large number have known only stagnation, perhaps buying their first share in a company after the global financial meltdown in 2008.

We all recall the extraordinary emotional rollercoaster that was 2008.

The year began with a record deep-freeze across South China, followed by the devastating earthquake in Sichuan Province, the national glory of the highly successful Summer Olympic Games in Beijing, and then – seemingly just as the closing ceremony was winding down and the Olympic Flame being extinguished – the global economy went into freefall.

The danger for these relative newcomers to China’s capital markets in Shanghai and Shenzhen is that they might expect a helping hand from Beijing to cure all ills – natural and man-made.

After all, the PLA came out in force both in the winter and spring of 2008 to assist stranded travelers in iced-over southern provinces, and then to pull survivors from the rubble of China’s second worst earthquake in modern history a few months later in the country’s southwest.

Then, when the Summer Games in the nation’s capital were widely recognized as one of the most successful in history, the hard work of the government (and volunteers) was widely lauded across the nation by a proud populace.

But the markets are another story, despite the best hopes and dreams of shareholders.

The government may be able to mobilize the masses to rescue its citizenry during natural disasters.

But a man-made “disaster” like the Wall Street meltdown in 2008 and the profound negative repercussions it had on markets around the world – seemingly overnight – cannot be cured by sending troops or enlisting volunteer greeters and drummers.

The new generation of Chinese investors is, without question, far better off than their parents.

They are better educated, better fed, better funded and far far more “wired” than their predecessors ever dreamed of being.

But they must realize that free markets act according to free will, and are subject to real-time, on-the-ground market impulses and trends.

Therefore, it is not so much the system or the shares that are immature.

Instead, the youth and relative inexperience of shareholders new to the game are partly to blame, and they need to realize that the answer to a bear market is not necessarily more stimulus packages from Beijing, or ever-cheaper credit terms.

The answer for new investors, as it was for their parents, is not to look for help or blame elsewhere.

Instead, these still wet-behind-the-ears investors should realize that there is still no better guarantee of prudent investment strategies than doing your homework.

ONE MAN’S TRASH... Time To Look At ‘Garbage’ A-Shares?