The tables below show the top 20 gainers and losers of 2016. Top gainers with a PE ratio of less than 15 times are highlighted.

The above total return data from Bloomberg includes capital adjustments and dividends over the year to 30 Dec 2016. 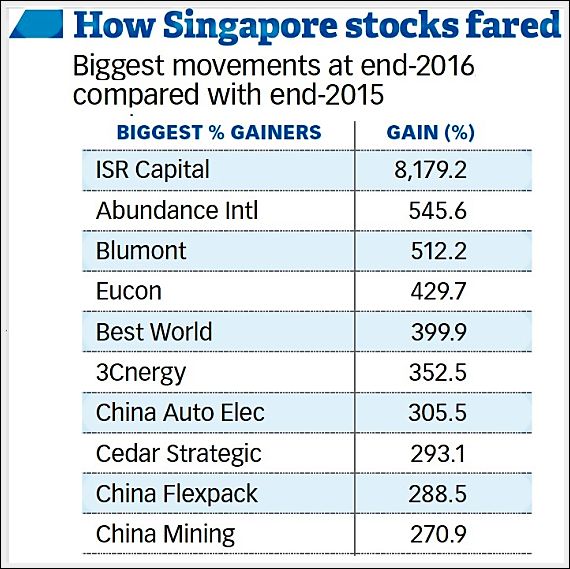 The Business Times last Saturday published its version of top gainers some of whose figures are very incorrect.

Did Blumont turn in a 512% gain? Nope, it was minus 33%. And Abundance International's gain was nowhere near as abundant as reported.

Top 5 gainers today... up to 98cts. Here are the sales, gross profit, gross margin %, net profit, Profit Before Tax (figures are in USD)
Their cash jumped to US$6M, NAV is 86cts USD (S$1.22). Debt continues to reduce on a very healthy balanced sheet.

In the next few months, the company will be starting a tmall.com online store to get sales, and for their franchisees to deliver.
Quote
+1 #1 Contrarian 2017-01-28 21:52
KODA is a gem recovery play.

1. After years of restructuring,i t is now growing the COMMUNE brand via franchising in China. The plan is to sign up 100 franchisees in 2 years. They are also setting up tmall online presence in next few mths

2. The focus on key accounts is showing results.

3. At $20M market cap, this coy has a solid balance sheet and is poised to more than double its earnings. Current valuation is at Price to Book of 0.6

We have 1515 guests and no members online