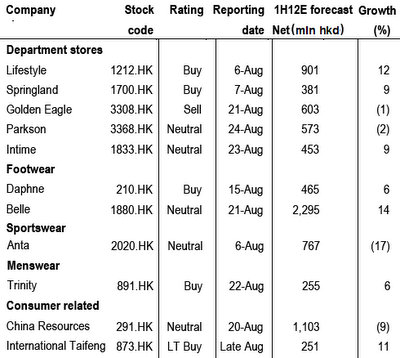 The sector will kick start the 1H12 reporting season next week, with Lifestyle and Anta to be the first to announce their interim earnings on Monday.

“Despite an imminent earnings growth slowdown across all segments, we expect footwear (with 1H net profit estimated to rise 6-14%) to fare better than department stores (estimated -2% to +12%) which were affected by increased commission rate pressure and higher new store start-up loss due to more aggressive expansion plans, while sportswear continues to be the poorest (with declines from 11% to over 50%) amid severe destocking pressure,” Bocom said.

The research house added that in its coverage universe, it expects Lifestyle to have the potential of earnings upside surprise, while Parkson may post a below-consensus profit.

“For CRE, we expect the 2Q decline to narrow considerably due to the strong beer growth, though the retail business remains the key share price overhang. Overall, the key focuses for the sector in 2H12E are SSS trend, retail discount pressure and new store expansion pace.”

It is reiterating its key “Buy” on Prada (sector top pick), Sa Sa, Daphne, Lifestyle and Trinity; “Neutral” on Belle, CRE, Intime, Parkson and Anta; and “Sell” on Golden Eagle.

“For Daphne, we expect 1H12E net profit to grow 6%, led by 30% revenue growth on 17% SSS growth and 7% new store increase, but considerably offset by 2.9ppt drop in OP margin to 13.1% due to higher discounts and increased operating cost.

That said, despite the less exciting 1H results, Daphne remains its preferred stock in the ladies’ footwear universe due to its better longer-term growth story (FY13-14E EPS CAGR of 24% vs. 15% growth of Belle) underpinned by the margin upside potential (vs. Belle’s peaked margin trend).

Bocom said it expects department stores' 1H earnings growth to range from -2% to +12%.

It added that it anticipates Lifestyle will post the highest net profit growth (+12%) with PCD Stores, which issued a profit warning, to see the poorest growth. 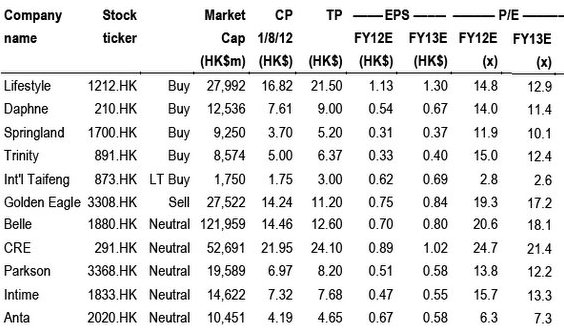 It reiterates its “Buy” on Springland.

“We believe the sector’s earnings downside risk remains the highest among all retail segments, due to mounting margin and sales pressure amid the industry’s sustained structural problems, plagued by price wars due to lingering destocking and over-expansion problems,” said Bocom.

Apart from Li Ning, China Dongxiang and Peak which issued profit warnings, the research house expects the rest of the sportswear names to post double-digit net profit declines, with its estimated -17% for Anta.

“We believe the persistently low visibility and negative newsflow will continue to cloud the sportswear market outlook.”

“As for the interim results preview, drug products should maintain growth. The healthcare industry reported a YoY growth of 19.1% in total revenue in the first six months of the year, indicating a slowdown compared with the beginning of the year,” Bocom said.

It added that it believed the toxic capsule scandal earlier this year caused a short-term impact on the industry.

Net profit for the sector showed a faster growth of 17.4% compared with the beginning of the year.

“The difference between the growth of revenue and net profit gradually narrowed, indicating a margin recovery.”

We have 415 guests and one member online