Singapore's latest property measure: What analysts say about it.... 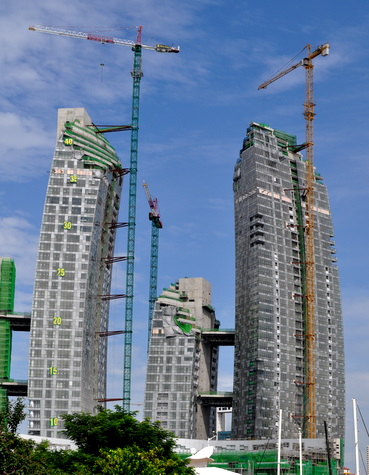 The measure follows on the heels of rising home purchases by foreigners, which reached 19% of overall purchases in 2H11 from 7% in 1H09.

We compile a number of analyst commentaries released this morning as stocks such as CityDev, Keppel Land and Capitaland tumble 7%:

UBS said: "While the last 3 rounds of tightening were anti-speculation, this move is targeted at investment demand. Paradoxically, a potential capital flight out of Europe into Asia may have galvanised the resolve to ring fence the domestic property market."

JP Morgan said: "We think we are likely to see near-term share price weakness for the sector on the back of this announcement."

JP Morgan analysts noted that stocks declined 13% on average within one month of the measure announcement in Jan 11.

That said, most of the developers are already trading at a level that is 1 s.d. below the average discount to RNAV with the exception of City Development. This, together with the stock’s year-to-date outperformance would make it the most vulnerable amongst all developers, said JP Morgan.

It continued to believe that the employment market would be the key factor that drives the stability of residential pricing in Singapore and therefore a low likelihood of a sharp decline in pricing, given strong holding powers from both individuals and developers.

Daiwa, which already claims to be "one of the few brokers to forecast a prolonged downturn in home prices," said the likelihood of its current forecast for home prices to decline by 22-26% from the end of 2011 to the end of 2014 has improved greatly.

"We maintain our Negative view on the Singapore residential property sector, and our Underperform rating for City Developments (CIT SP, S$10.02) and Hold rating for CapitaLand (CAPL SP, S$2.61)."

Deutsche Bank issued a sell call on City Development and OUE, preferring REITs for their attractive yields and resilience.

It said Wing Tai and CityDev have the highest sensitivity to residential prices with every 10% change in price resulting in a 6.1% and 4.1% change in their NAVs respectively.

"We remain cautious on the developers (Sell City Dev, OUE) and continue to prefer the REITs (Buy MCT, MLT, MINT).

Morgan Stanley saw a silver lining: "We think this 5th round of cooling measures could prove the peak for policy action (good news, in itself) and also the peak for prices – which have risen 54% since their trough in 2Q09 to 3Q11."

It thinks the peak to trough correction for property stock prices will be closer to 25% suggesting another 20% or so downside from here. Also, the market needs to digest the impact from these measures and developer stocks typically only truly trough 1-3 months before the MoM change in property prices – a 1Q13 event, meaning lackluster performance for the sector could carry on through most of 2012.

RBS, joining the chorus of analysts, singled out City Dev as being the hardest hit. "The new rules would be most negative for CityDevs (Buy, TP S$12, under review), given its 40% exposure to the residential sector."

UBS said: "We believe it is not in the government’s interest to drive down property prices. But, given the severity of the new measures, it is hard to see how physical prices will not start falling. Assuming stocks fall as per Jan-11, Q112 may be a good time to start putting cash to work in the developers. In 2009, stocks recovered in Mar-09, even as property prices fell another 14% QoQ in Q109 and 4.7% QoQ in Q209."

DMG downgraded CityDev and Wing Tai to sell and neutral, respectively, but held up CapitaLand as a buy.

"Within the sector, our preferred pick is CapitaLand in which we continue to see value in its multigeographical, multi-segment exposure and a well established asset recycling
platform. Stock is trading 41% steep discount to RNAV and 0.79 P/B (against 5-yrmedian P/B of 1.34). Recent share buyback by the company vindicates value embedded in share price, which also may see re-rating from active capital deployment into attractive acquisitions moving forward."

K-REIT: "Why I will sit out this one"

0 #4 Young_woman 2011-12-10 16:53
Calvin, Overkill? Hey, we young working adults find this a welcome. The current property prices are nonsense -- such a burden for the rest of our lives. We certainly hope prices come down 30%.
Quote
0 #3 Calvin 2011-12-10 06:03
I wrote about this measures as well and the effects of these measures. I believe it is an overkill and will shift investor interest significantly to commercial/indu strial properties.

http://www.investinpassiveincome.com/additional-stamp-duty-for-singapore-properties/
Quote
0 #2 yyp 2011-12-09 09:38
PRC Rich ultimate destination is US. now their home property collapsing. can get cheap cheap. no point come here paying extra 10%.
Quote
0 #1 Singaporean 2011-12-08 06:02
Not sure if the China wealthy will be deterred. Those that value Singapore's education system for their children and the peaceful environ for their families.... this is a small price to pay. For SG, this is good extra revenue.
Quote
Refresh comments list
NextInsight.net

We have 1212 guests and no members online