SANI HAMID: 'No turning point in crisis yet, market bottom not in sight yet'

Reproduced with permission of Financial Alliance from its October market outlook which was sent to its clients recently. In November 2008, Financial Alliance (www.fa.com.sg) became the first and only Financial Adviser Firm in Singapore to achieve both the Singapore Quality Class and the People Developer status.


Q. Is there any genuine reason to believe that the European financial sector recapitalisation efforts will signal the turning point in the crisis as markets hope?

Financial Alliance (FA) : We do not believe so. In the 2008 crisis, the U.S. authorities introduced a host of measures, including the Troubled Asset Relief Program (TARP), which gave markets temporary relief but failed to stem the general downtrend. In our view, things will remain very much the same as markets may rally in anticipation of such measures, only to fizzle out post-announcement with the sideways/down trend to resume thereafter.

In fact, volume has been thin in the recent upswing in markets, which is typical of a market correcting higher without conviction. The real point to note is that the primary downtrend has not changed. Investors need to realise that there is a primary trend and a secondary trend. The latter is always influenced by short-term factors such as the recapitalisation news and can therefore swing either side.

For example, in the second half of September it was going down and in the first half of October it went up. However the more important primary trend remains south bound.

However, don’t get us wrong. Europe’s latest financial sector recapitalisation plan (the European Financial Stability Facility or “EFSF”) is an essential part in helping to rebuild market confidence. But as the TARP episode in the U.S. and experiences in other crises have shown us, market bottoms are not normally found at the time such measures are introduced. Instead, markets will continue to trend lower until a time a confluence of factors come into place to create a bottom. 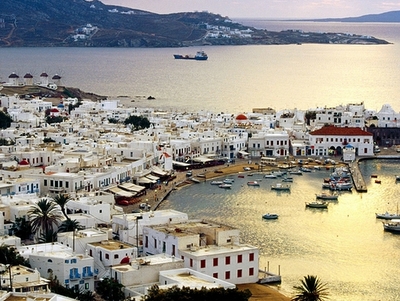 Mykonos (above) in Greece is a popular tourist haven. Bondholders of Greece have just been forced to accept 50% writedowns on the debt in order to save Greece. Photo: Internet

Q. Can you explain why you feel the primary trend is still pointing down at the moment?

FA: Well, we believe that there is a slowdown in the world economy which is presently being severely underestimated. We believe that even if you took away the debt problems in the U.S. and Europe tomorrow, we’d still be faced with a serious global slowdown – that’s why the primary trend is still down. This slowdown will likely cause a re-rating of earnings growth and weigh down sentiments in the months ahead.

Many will ask “Hasn’t the market discounted this slowdown?” The answer is no. If there is one thing we are very certain about, it is the fact that there will be more reductions in growth forecasts in the future. This, we believe, has not been discounted by equity markets. We have not seen the last of downward revisions in growth because it is very difficult to forecast just how slowly the world will grow. There are 3 reasons for this:

1. The problems in Europe and the U.S. are ongoing. In other words, these are dynamic and not static. And as they continue, sentiment and the global growth outlook will deteriorate further. These problems cannot be easily solved. And politically, we believe the space for politicians to maneuver is getting tighter. For example, even among France and Germany, there is a split on the rescue plan for Europe; in the U.S., President Obama’s jobs bill is facing resistance; large scale street demonstrations are threatening the Greek government, etc.

2. It is extremely difficult to put one’s finger on just how slow global growth will be given it is a synchronised slowdown across all major economies in the world. Based on the set of Leading Economic Indicators published by the OECD, at least 90% of the global economy (the aggregate nominal GDP of the 13 countries tracked by the OECD LEI) will be in a slowdown in the coming 2 quarters. With so many countries slowing down at the same time, it will not be surprising if the feed-back loop causes many economists and analysts to underestimate the extent of the present slowdown.

3. The policy options are increasingly limited. The roles of both governments and central banks are being limited by the huge fiscal debts and already ultra loose monetary policies respectively. In the past, economies could depend on fiscal pump priming or a monetary jolt from lower interest rates to revive consumption. That is not the case today. Governments who pursue the path of printing more money are likely to be pushed by the markets while central banks have been rendered impotent and have to resort to unconventional means (e.g. Operation Twist by the Federal Reserve).

Q. Can you update us on what the latest Leading Economic Indicators are saying?

FA: In the latest press release dated October 10 for its August Economic Leading Indicators, the OECD said “Composite leading indicators (CLIs) for August 2011 continue to point to a slowdown in economic activity in most OECD countries and major non-member economies. The CLI for the OECD area fell 0.5 point in August, the fifth consecutive monthly decline”.

On top of that, other institutes, such as the Economic Cycle Research Institute, now believe that a U.S. recession is a likely event. Closer to home, the latest advance estimate shows that Singapore avoided a technical recession in Q3 but in reality it would have been one if not for the volatile pharmaceutical sector. The MAS has also softened its stance on the strength of the Singapore dollar in view of the global economic situation.

Nonetheless, monthly economic data have yet to fully reflect this slowdown, causing equity markets to cheer some of these positive numbers as the prognosis is that the world is holding up despite all. But in 2012, we believe almost all economic data will be pointing south as the slowdown permeates across all sectors. Also the high base in the first half of 2011 will not help data that are not seasonally adjusted. 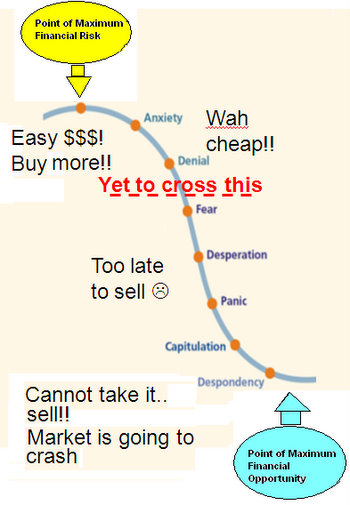 Q. You mentioned a “confluence of factors” have to come into place to set a market bottom. What are these?

FA: This refers to the experience from the 2008 crisis when equity markets were oblivious to signs from the credit markets, the economy and other factors. These “non-equity market” factors had suggested that the overall situation was deteriorating rapidly in mid-2008 and conversely, that the situation was improving in early 2009. Today, we feel that equity markets continue to be overly optimistic when compared to the credit market and the economic outlook (which we discussed earlier).

Sooner or later, the former will adjust its expectations to align with the latter two. Sentiment, which we term as fairly bullish presently judging from the sharp rebounds in equity markets on every piece of good news, also suggests we are still in the upper half of the cycle of emotions (see diagram on the right).

Focusing on the credit markets, which we have also touched on in previous reports, there are still signs of stress there. Corporations are delaying their bond issues either because of unattractive borrowing rates or the lack of interest altogether while there remain signs of stress in Europe.

Many banks, for example, park their money with the European Central Bank (ECB) because of the lack of confidence in placing such funds with other counterparties under the present circumstances. Separately, there are some banks who borrow from the ECB, which is a sign that these banks cannot get funding from other banks which fear a systemic risk. As we have learnt from the 2008 crisis, stress in the credit market cannot be ignored. Similarly, improvements in this market could foretell a recovery in equity markets. Note though that we do not expect the situation to mirror 2008.

Q. Have you made any changes to your view since the last report?

FA: No. Our overall view remains that markets are in a transitional phase now as it moves from a bullish to a sideways/bearish market. We believe that markets are still in the first half of the full potential decline i.e. as market comes to terms with the economic reality and more occasional shocks, we will see more downside. At this point it is hard to put our finger on where we should start going back into the equity market but maybe at 15-20% lower from present levels over 3-6 months from now. As such, at present, we continue to adopt a capital preservation attitude.

While our allocations remain the same, we have however made some changes to our holdings. This comes in the form of a recommendation to switch our bond holdings from short-duration funds to a cash-like fund. This is because, in recent weeks, short-duration funds have suffered a rare decline. Although it is small at 2-4% compared to what we have seen in equity markets, it is still unnerving given that such funds have traditionally held up their values very well.

Separately, there has been a sharp rebound in the U.S. dollar and a corresponding fall in regional currencies. We believe this is temporary in nature and do not see the U.S. dollar on a permanent uptrend. The U.S. dollar gained recently as a result of the movement of funds out of Emerging Markets back to it as a perceived safe haven. This reversal of funds out of Emerging Markets is also a temporary phenomenon as markets shift from a bullish global outlook to a bearish one.

On a positive note, the weakness in regional currencies, coupled with the decline in prices of shares in commodities-related companies and some Emerging Markets countries which are net exporters of commodities, like Brazil, Russia & Indonesia, set-up a compelling environment to pick up such exposure. It now boils down as to when to pull the trigger to go back into these markets. We believe this will be when it is the darkest (bearish) in the market - and we haven’t reached that point yet.

Sani Hamid currently holds the position of Director (Economy & Market Strategy) in Financial Alliance. He has more than 17 years of working experience in the financial markets, having worked for companies such as S&P MMS where he led a team of analysts covering Emerging Asian economies; BNP Paribas Peregrine as a senior economist; and S&P Ratings as a sovereign analyst overseeing the ratings of countries such as Indonesia, India, Malaysia and Singapore. He has been widely quoted in the media throughout his career and has spoken at numerous international seminars on a range of topics. He holds a Masters in Social Science in Applied Economics from the National University of Singapore and is a Certified Financial Planner (CFP). He also has a Certificate in Islamic Banking & Finance from the International Islamic University of Malaysia.

0 #2 Kevan 2011-10-29 04:50
The euro deal has triggered a run-up in stocks which is not surprising since it is positive development and it comes after the violent collapse of stocks. It's Mean Reversion kicking in. My bet, and hope, is for a continued recovery all the way to year-end.
Quote
0 #1 Rayner 2011-10-28 06:38
I agree the current rally is a relief rally -- thank god those buggers in Euro can finally act to stop the rout. The devil is in the details -- so we need to see how they would be unveiled and see how they changed the direction of the Titanic.

What is an unexpected bonus is that US is surprising on the positive side. Its economic data have turned positive for the first time since April. It's a bad cliche but financial markets are always really to surprise investors.Good luck everyone, whether you are shorting or taking long positions.
Quote
Refresh comments list
NextInsight.net

We have 1733 guests and no members online