MTQ Corporation staff are having an exceptional bonus this year: the company is paying out $3.2 million to them after reaping a big gain from selling its stake in an Australian company.

And on this Friday (Nov 30), MTQ shareholders will receive a gift in the form of a special gross dividend of 24 cents a share.

This is on top of the normal 1 cent a share for the company’s half-year performance ended Sept 30.

A beneficiary of the booming oil and gas industry, MTQ had a net gain of $28.2 million from the sale of its stake in Aussie engineering company RCR Tomlinson.

Excluding this gain and the special staff bonus, the company’s operations enjoyed a 122% jump in net profit to $5.27 million.

With such sterling performance, MTQ stock price has followed a similar trajectory.

From around 40 cents in April this year, its stock price surged to as high as $1.15 this month before falling back to the current 67 cent-level after the stock went ex-dividend on Nov 15.

Reflecting his confidence in his company's prospects, chairman and CEO Kuah Kok Kim scooped up 414,000 shares of MTQ after the stock went ex-dividend.

His direct and deemed interest in the company now stands at 20.7 milliion shares, or 21.6%.

At 67.5 cents a share, MTQ's market capitalisation is around $65 million.

Established 38 years ago, MTQ repairs sophisticated offshore oil-drilling equipment at its workshop in Pandan Loop. Its customers operate in neighbouring countries such as Indonesia, Malaysia, Brunei, Thailand and Vietnam.

Why do they send equipment all the way to Singapore?

“In Singapore, we have only one or two competitors.”

Each job usually takes several weeks at its 14,000 sq m yard, so MTQ – which has 140 staff in Singapore - does not have a long-term order book.

Most jobs cost anything from $50,000 to $200,000, said William, adding that clients will pay a premium for the quality of service that MTQ delivers.

“An oil & gas project is massive and profitable. Customers won’t try to save some money on critical equipment repairs by going to small workshops,” he said.

MTQ Engineering is the authorised repair workshop for OEMs such as Cameron, Varco-Shaffer and QVM.

”The prospects of the industry remain strong,” said William, adding that there isn’t a seasonality to the business.

With its yard operating at near full capacity, MTQ has been investing in new machinery to boost efficiency. 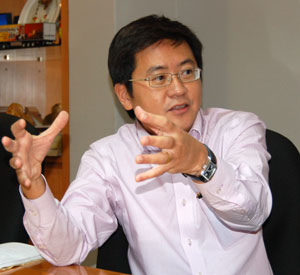 The capex for the last financial year was about $5 million, a figure which is expected to be matched this year.

While the oilfield equipment division accounts for slightly more than half of MTQ’s revenue, its Australian business of distributing turbochargers and fuel injection parts accounts for the remaining portion.

MTQ has a new business of fabricating steel structures, which starts operations in the current financial year which began on April 1.

Similarly, MTQ’s “real work” in OEM manufacturing of components starts this year, following the groundwork that was done last year.

We have 350 guests and no members online