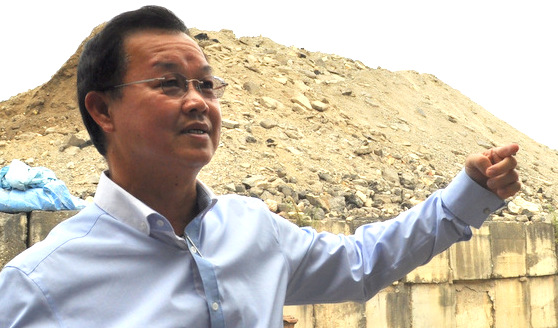 Ley Choon Group executive chairman and CEO, Toh Choo Huat, at the company's construction-waste recycling plant in Lim Chu Kang, which has been operating since 2007. A bigger-scale plant is being completed by Ley Choon in Yantai, China. Photo by Leong Chan Teik

Not many Singapore construction companies have succeeded in generating sizeable revenue from overseas. Ley Choon Group is an exception -- and increasingly so.

Over the next few months, Ley Choon will fit out its new plant in Yantai, China for recycling construction waste.

In Brunei which Ley Choon ventured into in late 2011, its 51%-owned joint venture has already announced nine contracts worth S$84 million for public infrastructure projects -- with the help of extra funding from Ley Choon as well as its niche expertise in laying pipes.

The story of Ley Choon's venture into China was shared with NextInsight recently by its CEO, Toh Choo Huat.

A regular traveller to China for the past 20 years, he recalled travelling to Yantai a few years ago after hearing good things about it from Chinese workers employed at Ley Choon.

There, he noted the extensive on-going development of the city which involved the tearing down of old structures, which generated a lot of construction waste. He approached local officials with the vision of a recycling plant.

"A lot of people think that recycling is just crushing the stones and using them again. It's more than that -- it's about converting them into products such as bricks, asphalt and ready-mix concrete," said Mr Toh. 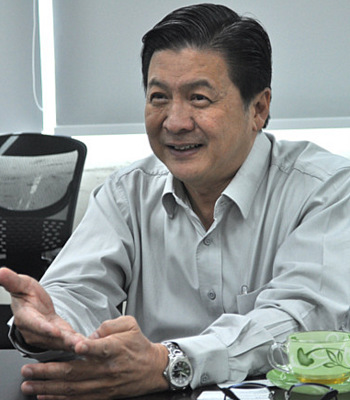 Francis Koh, executive director of Ley Choon Group. Photo by Leong Chan TeikExecutive director Francis Koh recalled: "We invited government officials to view our operations in Lim Chu Kang and they were impressed. Soon we signed a M.O.U and got a 50,000 sq m piece of land to set up a plant in Yantai."

Contractors will have to pay Ley Choon for taking in the waste while Ley Choon will also make money from the sale of recycled products. The local government is offering tax rebates to Ley Choon.

Ley Choon, which is big on asphalt production and recycling in Singapore, plans to also build an asphalt plant to process the asphalt from roads in Yantai which are torn up for expansion and re-routing, and extract bitumen as the raw material for producing new asphalt. 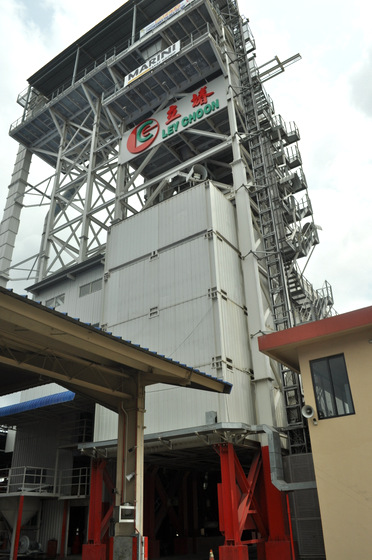 For example, it is the first such plant in Singapore that has a custom-made lift -- and it goes all the way to the top of the 15-storey structure, a feature that is appreciated especially by the maintenance workers.

Daily, it produces asphalt premix to fill more than 100 trucks to transport to various road projects in Singapore. In all, Ley Choon - which has another plant - has doubled its actual production of asphalt.

All this new capacity will enable Ley Choon to meet the demands of its road maintenance projects, including two contracts totalling S$64 million from the Land Transport Authority as announced last July.

In its other business of laying water and gas pipes and electrical cables and rehabilitating sewer lines. Ley Choon digs up roads and re-lay them -- which means asphalt is needed here too.

Mr Toh said some 60% of the output is for internal use while the rest is sold to third parties. A year or two ago, third-party sales accounted for only 10-15% of the production. 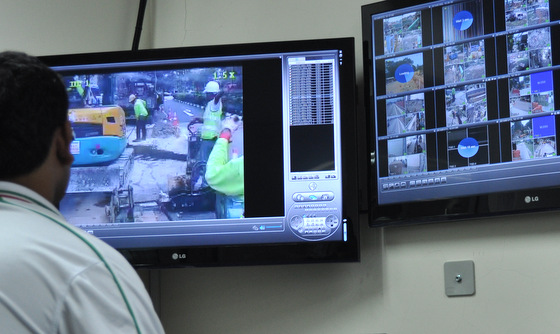 This is the command centre in Ley Choon's office in Sg Kadut. Videos are received real-time from multiple CCTV cameras at not just the job sites but from moving vehicles of Ley Choon.
Photo: Leong Chan Teik

As for market share, Mr Toh said that Ley Choon had about 20% but with its second plant, the figure is expected to shoot up to 40%.

With Ley Choon consistently winning contracts from the Public Utilities Board (PUB) and the Land Transport Authority (LTA), one gets interested in the key competitive edge it wields.

Turns out that it has to do with, among other things, having the construction waste recycling plant and its own asphalt plants, and being able to deploy its skilled workers across a variety of business niches when demand slackens in one niche and rises in another.

"We are strong in underground utilities and we have synergies from owning our own recycling and asphalt plants," said Mr Koh.

Having a large in-house pool of workers (more than 1,400) instead of relying on sub-contractors has proven to beneficial in the light of some of its peers experiencing difficulty engaging sub-contractors.

Amazingly, Ley Choon also has customised CCTV camera systems set up on-site which it allows clients (such as LTA and PUB) to view real-time footage of the work via the smartphone or tablets. Naturally, the clients are pleased with that. 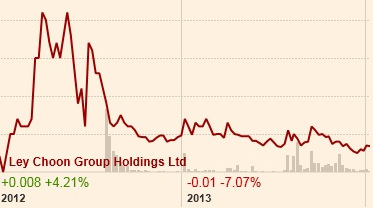 Ley Choon stock performance since it was listed via a reverse takeover in Aug 2012.
Chart: FT.comThere are several other leading uses of technology in Ley Choon. Daily, workers key in details of their work on-site into an electronic worksheet -- the number of work-hours clocked, pipes laid, etc.

The data in aggregate tells management instantly about the progress of a project, expenses and materials incurred, etc.

Despite its leadership position in Singapore and its burgeoning overseas business potential, Ley Choon stock traded in a tight range of 17.5-22.5 cents throughout 2013. At 18.4 cents recently, it sports a trailing PE of 9.2, according to Bloomberg data.

Coming soon: As the final dividend, Ley Choon has promised a 30% payout of its 2013 net earnings (inclusive of the fair value gain). Going by Voyage Research's forecast of $12 million net profit and taking into account the $11.4-million fair value gain, the dividend yield could hit 6%.

We have 609 guests and 4 members online