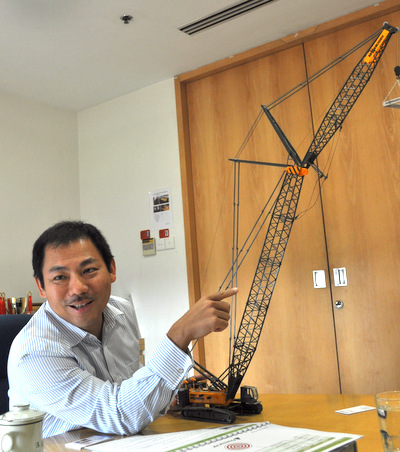 Pek Lian Guan, CEO of Tiong Seng Holdings, with a model of a crane newly acquired by his company.
Photo by Leong Chan Teik

Station and alignment details of the upcoming Thomson MRT Line were unveiled recently, creating a buzz among stock investors over which companies could benefit from the S$18-billion project.

Among contractors, mainboard-listed Tiong Seng Holdings is expected to be a beneficiary. It will be bidding for jobs on the new MRT Line, said its CEO, Pek Lian Guan, during a recent meeting with NextInsight.

The company currently is working on a section of Downtown Line 2.

Its joint venture with GS Engineering and Construction (South Korea) clinched the contract to design and construct the Hillview and Cashew MRT stations and tunnels in the Upper Bukit Timah area.

Tiong Seng, which is not extensively covered by analysts, was listed on the Singapore Exchange in 2010.

The 12-month trailing PE looks rather low at just 6X. The recommendations of two analysts who cover Tiong Seng are as follows:

Aside from its potential to win Thomson MRT Line contracts, Tiong Seng is a company to take note of for reasons including:

> Orderbook: Its construction order book stands at an all-time high of S$1.4 billion currently, and it is the largest among contractors listed on SGX.

The order book is expected to be fulfilled in the next 12 – 30 months.

As the list indicates, Tiong Seng is a versatile contractor. It has undertaken construction for private and public sectors in different categories --- residential, commercial / hotel, institutional and civil engineering.

> Innovative: Tiong Seng is a pioneer in a number of areas. For example, in May 2012, it officially opened its pre-fab hub, which is Singapore's first and only automated pre-cast manufacturing facility.

Since 2005, Tiong Seng has been designing and producing pre-cast components for use in most of its projects, making it a standout among contractors in Singapore. 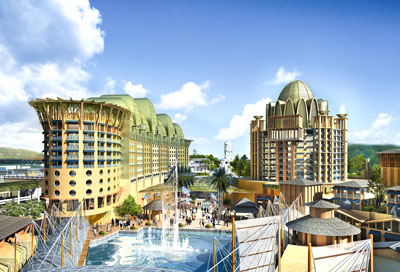 > Established: Tiong Seng is 53 years old this year, making it one of the most established construction contractors around.

Several of its major projects in recent years, both on its own or through joint ventures, have become icons in the Singapore landscape, including:

> Leadership: A market leader, Tiong Seng Holdings holds the highest A1 grading from the Building and Construction Authority (BCA) in both the civil engineering and general building categories. This grade is a prerequisite for undertaking construction projects of unlimited value in the public sector.

His father, Pek Ah Tuan, is one of the founders of Tiong Seng.


This article is the first of 2 on Tiong Seng. Part 2 elaborates on certain areas of business. Click: TIONG SENG: Managing rising costs with productivity innovation

There will be problems ......so do other jobs too !!
BUT it will be the 1st time a local contractor attempts to execute $1.4 BILLION worth of CONTRACTS within 30 months !!

do u have any more construction counters to recomend, for eg csc yongnam
Quote
Refresh comments list
NextInsight.net

We have 2091 guests and no members online