Dividends will be paid from the Company's Net Exit Proceeds (as defined below) according to the following formula:

The dividend payment is subject to Board’s approval and the fulfilment of the relevant conditions prescribed by the Israeli Companies Law for the declaration of dividends.

Exit proceeds means the cash actually received by Trendlines for the relevant financial year, including by way of royalties from the occurrence, in a single transaction or in a series of related transactions, of any one or more of the following events with respect to a portfolio company:

Net exit proceeds means Exit Proceeds less any taxes or expenses that the Company is required to pay in connection with the exit (“Net Exit Proceeds”). 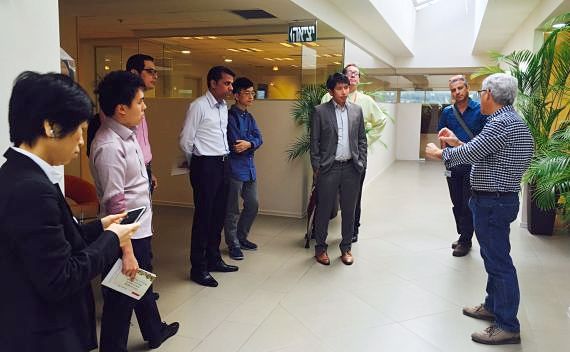 Trendlines Co-Chairman Todd Dollinger takes Singapore investors and analysts on a tour of Trendlines office in Israel in 2016.

Under the Israeli Companies Law, a company may affect a distribution only under certain conditions and only out of its distributable profits, provided that the Board determines that there is no reasonable concern that such distribution will prevent the Company from satisfying its existing and foreseeable obligations.

We have 548 guests and no members online