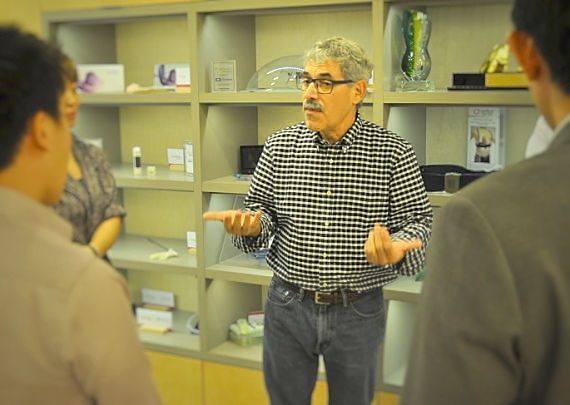 Trendlines co-chairman Todd Dollinger describing some of the innovative devices of Trendlines on the shelves behind him.
Photo by Leong Chan Teik

In Israel for the AgriVest 2016 conference recently, I met Eddy Wang. A Chinese national, he is business director in China for Singapore-listed Trendlines Group. 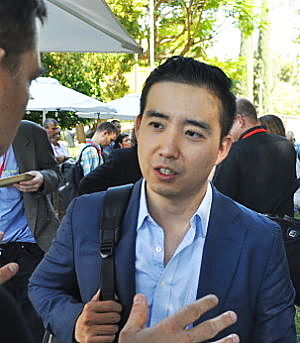 Eddy Wang: Sourcing for Chinese investors for Trendlines.
Photo by Leong Chan TeikIt was news to me that Trendlines has had a man in China for the past two years. Eddy's contribution is becoming evident. (He, in turn, is thankful for a growing pool of deep-pocketed investors in China who are enthusiastic about new technologies.)

In the park outside the venue of the AgriVest conference, I noticed a group of Chinese visitors during meal breaks. As I learnt, they were investors from China whom Eddy had arranged to seek exciting start-ups to invest in. 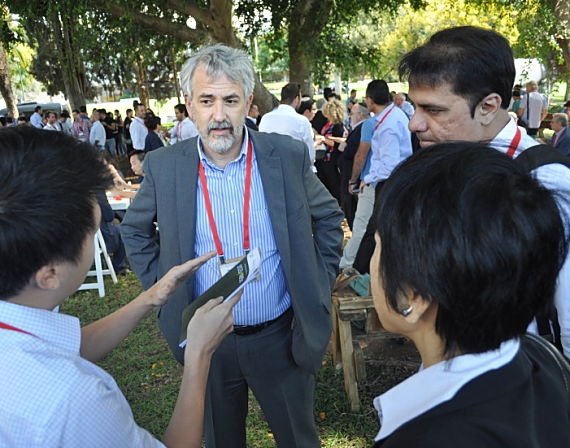 Trendlines co-chairman Steve Rhodes speaking with Singapore and HK visitors during a break in the AgriVest conference held at Weizmann Institute of Science.
And Eddy -- with the help of partners -- had lined up investors to attend the presentations of the seven portfolio companies that Trendlines took on a roadshow in Beijing, Shanghai, Shenzhen and HK in July this year. 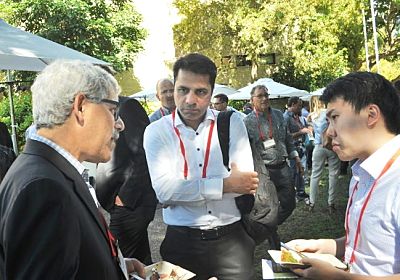 Trendlines co-chairman Todd Dollinger with Deepak Ramchandani and Saw Wei Jie from Singapore. Photos by Leong Chan TeikChinese money has already made its way into Trendlines portfolio companies such as Gordian Surgical, Acuro Medical and Sol Chip(click on the links for more info). "

A number  of other Trendlines portfolio companies are now negotiating investments with Chinese and Singapore investors.

Over time, Trendlines is likely to enjoy even greater success attracting Chinese money. That could happen pretty soon, as Trendlines is planning to hit the road again, in January 2017, to talk to investors in four big cities of China (and in Singapore).

The AgriVest conference would have opened up the eyes of other investors, especially those relatively new to Israel, to the fact that Israel is teeming with innovative start-ups.

Aside from the conference (more on this later), which was co-organised by Trendlines, we -- a group of analysts, investors and media from Singapore and Hong Kong -- had the opportunity to visit several Trendlines portfolio companies.

The curtain-raiser was: Heading to Israel to check out innovations of TRENDLINES' start-ups

We have 453 guests and 4 members online