Additionally, as far as optics go, the 1-cent dividend is a positive -- it marks the 9th consecutive year that the group has paid a dividend (see chart).

Note: (1) Total number of shares used for computing dividend per share are adjusted for corporate actions where applicable so that the dividend per share figures are comparable. Source: Uni-Asia
There are bright spots in Uni-Asia's story, as management pointed out in a FY20 results briefing.

As with the container shipping market, the dry bulk ship market that Uni-Asia takes part in has been enjoying a sharp rise in charter rates from 4Q2020. 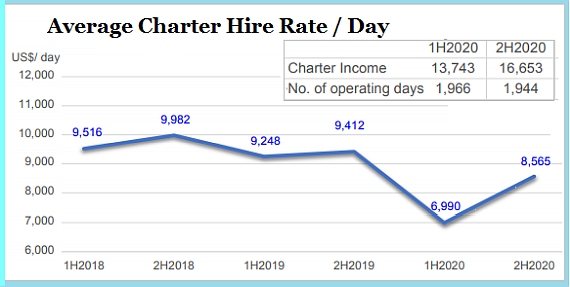 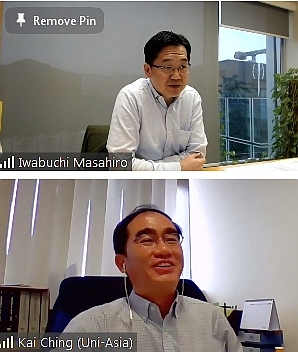 Executive Director Iwabuchi Masahiro and CFO Lim Kai Ching.Uni-Asia, which wholly owns 10 dry bulkers, said the rates have gone up due to factors such as an increase in Chinese dry bulk imports from the Atlantic and port congestions.

That helped boost the shipping segment of Uni-Asia to a $0.8 million profit in 2H2020.

But the full-year result was still a net loss of US$10.4 million largely owing to an impairment loss and a loan write-off.

Uni-Asia's dry bulk ships are on short-duration time charters, including two vessels whose rates are pegged to the Baltic Handysize Index.

Going forward, as in the recent past, charter rates will depend on several factors in global trade but particularly how much iron ore, coal and grain that China imports, he added.

Meanwhile, Uni-Asia's property business was profitable in 2020, contributing $4.3 million to the group's bottom-line.

Property investment in Japan accounted for US$2.0 million of the profit while investments in Hong Kong, US$2.3 million.

In 2020, US$2.5 million of fair valuation gain were recognised for property projects in Hong Kong

Uni-Asia has invested in 8 projects in Hong Kong, of which three have been completed and sold while five are ongoing, as follows:

Typically, Uni-Asia's stake in projects ranges from 20% to 100%, with an average investment period of less than 2 years with sums of of up to USD3m per project.

2020 saw the most number of new projects (12) and on-going projects (16)  as at year-end since 2011, including construction management projects.

For the full year, US$2.7 million of realised gain were recognised for ALERO projects.

The FY2020 presentation material is here.

We have 263 guests and 2 members online