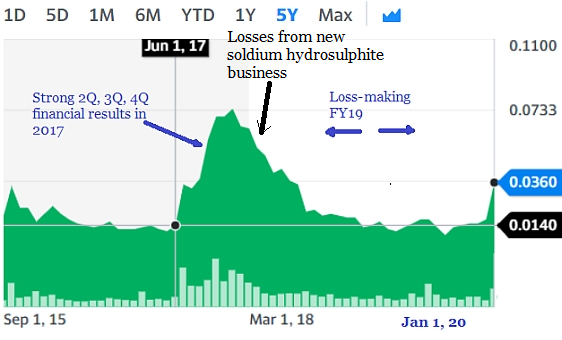 Business has been poor in the last decade so Jiutian has paid zero dividends.

That plus high debts and current account deficit, not surprisingly, caused the share price to be very depressed. It was considered a disgraced S-chip.

This was bought over from Stateglory Investments at 8 cents a share in 2011.

The SOE being the controlling shareholder and a Singaporean ex-investment banker at the helm, to my mind, suggest very little risk of business fraud.

Jiutian used to carry very high debts and had current account deficit. I recall that management promised in 2017 to start to rectify the situation.

Based on the 2Q20 results released a few days ago, they have delivered.

This was also a significant jump from RMB 2.8 million profit in 1Q2020.

By a stroke of luck, Jiutian saw one of its largest competitors shut down permanently recently due to environmental concerns, according to Jiutian's press release:

In the 2Q20 results statement, management guided that business fundamentals in the near term are expected to stay solid.

I've checked DMF selling prices in China, and am happy to learn that they rose from RMB 5k to 5.8k in the last couple of months.

That gives me some confidence to annualise 2Q20 earnings, arriving at a 12-month earnings per share of RMB 7.2 cents.

A factor that will have boost earnings is higher capacity utilisation for DMF. The rate for 2019 was 62% and 56% for 2Q2020, which means there is a lot of upside potential.

The share price has moved up sharply after the 2Q20 results but it could rerate further if the company continues to make good profits over the next couple of quarters and, one day, declare a dividend.

S-chips that have re-rated in such fashion include Delong (subsequently privatised) and China Sunsine.

We have 1002 guests and no members online