Jiutian is the second largest Dimethylformamide (DMF) producer in China, with a total annual capacity of 150,000 tons of DMF and methylamine (MA). Both these chemicals are important ingredients in industries as diverse as consumer goods, petrochemicals, electronics, pharmaceuticals and fertilisers. In addition, it now produces chemicals for fast growing sectors such as batteries that are used in electric vehicles.

Strong 1Q22 rests despite a surge in COVID cases.

The sales volumes could be less than last year during the same period as China started to adopt certain restriction measures to contain COVID-19 spreads in March, affecting logistics. 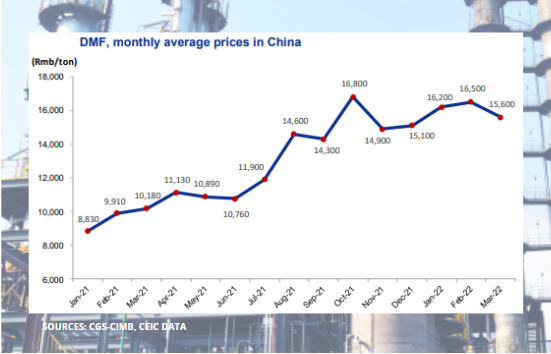 In the near term, China will continue to persist in its zero-covid policy which stifles economic growth. However, China started to carry out the counter-cycle monetary policies by lowering the loan prime rate and required rate of reserve in 1Q22.

Meanwhile, the National Development and Reform Commission is drafting a US$2.3tn infrastructure plan. Moving forward, the expansionary fiscal and monetary policies will uphold the rebound of the domestic economy in 2H22.

We have 1261 guests and no members online