3Q19 summary. UAG’s reported a decent set of 3Q19 results despite headwinds from its shipping business and a decline in fee income from lower deal transactions. Its hotel business continued to grow from strength to strength as 3Q19 hotel income rose 6% YoY to US$21.4mn on the back of higher occupancy rates. 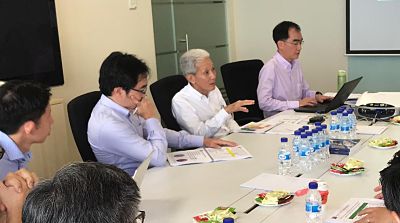 Executive chairman Michio Tanamoto (second from right) and CFO Lim Kai Ching (extreme right). NextInsight file photo.The group managed to pare down debt by US$37.1mn while increasing its cash holdings to US$57.3mn. As a result, gearing (total debt/equity) improved to 1.12x as at end Sep-19 from 1.36x as at end Dec-18.

The improved balance sheet and future cash flows will likely be deployed into its Japan businesses in the near to medium term.

The group was initially planning on investing in a 7th property project in Hong Kong, but this was placed on hold given the uncertainties in the city.

Japan hour. We highlight UAG’s Japan businesses in this report given the favourable tailwinds from the Summer Olympics next year and the potential for the group to increase recurring revenue through its asset management of hospitality, healthcare and residential properties.

Japan contributed 55-61% of UAG’s total income in 2017 and 2018, and represents businesses such as ship finance arrangement, investments and asset management of properties and hotels.

Risks: Shipping slowdown as the trade-war escalates. Decline in Hong Kong property market due to the ongoing protests.

We have 1485 guests and no members online