Republished from ThumbTackInvestor with permission

The share price tanked upon the release of a profit guidance. 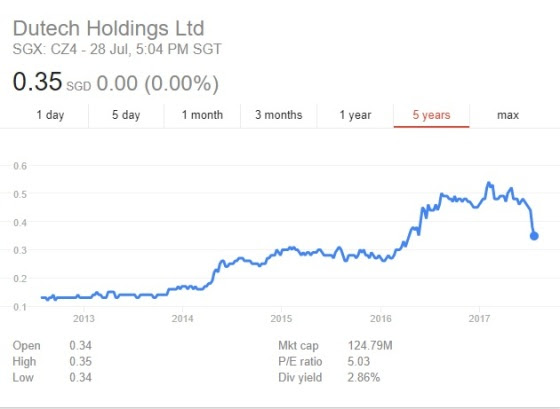 Nobody really knows how bad Q2 earnings would be, and I suspect the markets are pricing in losses. It's very possible. Dutech has everything going against it right now: Rapidly rising steel prices (which benefit my other holding, LTC Corporation, so there's a natural hedge here), global clients cutting back or delaying orders, excess fat and inefficiencies from a new acquisition and rising operating costs.

It's going to be rough.

But then again, the markets know that. Everybody knows that.

If there aren't bad news, the share price wouldn't tank. If it doesn't tank, I wouldn't buy.

The funny thing always is... when the share price is rising and keeps rising (presumably on good news and/or expectations), everyone wants to buy it but always laments on the share price not dropping. Yup, that includes me.

But when the share price does drop, there must be a reason for it and now suddenly everyone's afraid and you hear stuff like "catching a falling knife" or "cut loss level" or "wait and see". That's hopefully not me.

So a very rough gauge to tell if you're NOT participating in the madness of the crowd, is simply to look at the amount of news, coverage and general "noise" around.

This time last year, the share price was rising rapidly. You've news articles, analyses on the company. Financial bloggers analyse the prospects and paint a rosy picture. Analysts look favorably on the company. Everyone wants to get on board but waits for a little "dip" to do so. Johnny Liu was praised to high heavens.

Dutech could do no wrong.

Fast forward 1 year later, or maybe a bit less, about 9 months later, now Dutech is hated. It's a company with leprosy. Prospects look dim. I mean, it REALLY does.

Nobody has anything good to say about the company. Actually, nobody has ANYTHING to say about the company anymore. Suddenly nobody's putting out nice articles about Dutech. Nobody's clamoring to get in. CIMB ceased coverage citing "lack of interest". Do a quick check: google and find all articles/posts about Dutech. Tabulate the dates, and plot it against the share price chart of Dutech and you'd see what I mean.

Even if you're right... being wrong for a long time before being proven right, is no different from being wrong.

So what's my rationale?

Firstly, I think Dutech's unfairly beaten down because of the panic right now. I mean, I've received numerous emails and comments asking about Dutech. I can literally sense the fear and despair.

Even long time value investors whom I know.... are starting to lose faith. The doubt is understandable. I am not spared too. What does the profit guidance mean? Could it be just reduced profits? Or does Dutech sink into losses?

And if losses, how bad can it be? How about future quarters? Nobody (Aside from management) knows right now, neither do I.

Anyway, IMO, the ones bailing out right now, are mainly the retail investors who have gotten onboard in the past year when the share price was rising rapidly.

Look at the shareholder lists: 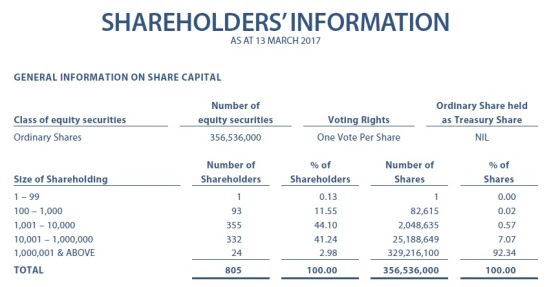 Within a year, as the coverage increased and the share price rose, the number of shareholders rose accordingly from 625 to 805. Yet, all the increase came from shareholders with relatively small positions of <1,000,000 shares.

It is the same group of retail investors with relatively small holdings who are scared witless right now. I don't think the 24 shareholders above are selling.

Secondly, I think a relatively quick turnaround is on the cards. I won't talk too much about Dutech's "Business Solutions" division. That's going to be the main focus for the company going forward, and that's where all the M&A is being done. It just takes time for Dutech to assimilate the newly acquired Metric businesses.

The hardware part, the "High Security" segment, is where it gets worrisome. There has been a lot of talk about our society going cashless, with the resulting need for fewer ATMs and hence, fewer of the safes that Dutech supplies.

To have a sense of what's going on, I went downstream in the supply chain to look at some of Dutech's main clients: Diebold Nixdorf and NCR Corporation.

Just for the sake of brevity, I'll just quote Diebold.

Diebold's results dropped as well, following a reduced profit guidance. (Yes, similar to Dutech. So we have a good reflection of Dutech here)

What are the problems Diebold is facing? 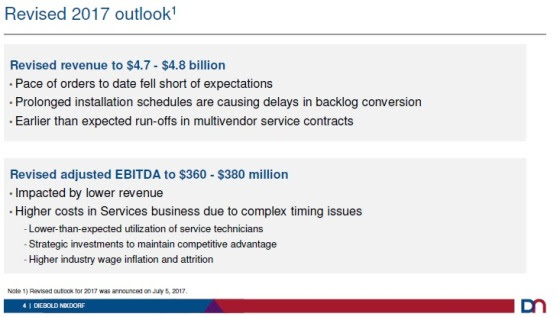 In short, banks in most developed countries as well as some developing countries (except India) are delaying the implementation of new ATMs. With the delay comes a corresponding delay in service and maintenance contracts for these ATMs. Diebold's existing contracts are running off, while new ones are not signed and revenue is not recognized.

The good news is that there's sequential growth in order books, and the order backlog is increasing: 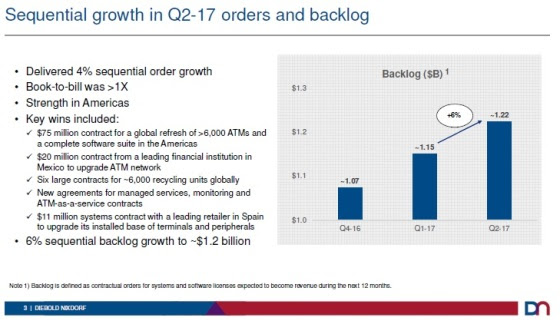 OK, the way this post is going, it's going to be ultra long so I'll have to be brief from here onwards.

In summary, Diebold is experiencing more orders, but the actual implementation of ATMs and their service contracts is dragged out over several more quarters. So the order book is increasing (by 6%). Diebold expects a bump in revenue recognition sometime in Q4 onwards. It seems that banks are cautious to commit to big, long term contracts, only to find that there is little mileage as ATMs become under utilized.

And I won't go into details here, but if you look at even their reduced guidance, it's really not that bad as to warrant a 17% fall in the share price in 2 trading days.

Which leads me to my next point.

I entered a long position in Diebold Nixdorf... after researching on the reduced guidance, because of Dutech Holdings. So 1 thing leads to another.

This is probably a good, quick summary:

Upon release of the news, the share price tanked from $28 to as low as just below $20. 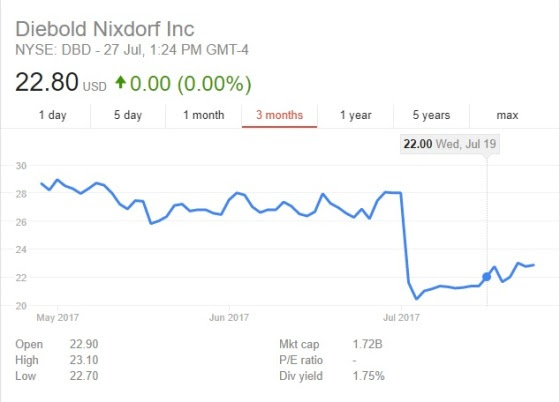 I thought the plunge was exaggerated, and decided to go long. My long position was not a pure equity position though:

And of course, I didn't buy at its absolute lows, but initiated a long position when there's some sign of a rebound.

The way I see it, such a set up would only be a losing position if the share price suddenly continues to tank, such that my pure equity position loses money and all my put options gets exercised.

This is a scenario that is highly unlikely, since all the bad news have already been priced in.

If the share price even remains flat, it'd be a safe position because the premiums from the expired options would basically cover almost all my equity position.

As it stands, it's been only 2 weeks since I'm done with my long position and the share price has continued recovering. I'm sitting on a profit of around US$4.3k right now at the time of writing (assuming put options all expire). I'd be looking to exit when the share price reaches US$24.5 or so.