DUTECH: I predict a blowout 4Q16 on an one-off gain

Republished from ThumbtackInvestor's blog with permission. The article below is the top half of a long piece on Dutech Holdings which you are encouraged to read at the blog of ThumbtackInvestor, a Singaporean in his mid-30s, whose portfolio is valued at just over S$1 million.

Which is in turn a continuation of my initial investing thesis written way back: Dutech Holdings Investing Thesis

In this post, I'll aim to project what goes into Dutech Holdings' FY16Q4 results, as well as analyze in detail their most recent acquisition.

Now, CIMB's coverage of Dutech's financials is pretty extensive, and although in my previous post I cross referenced their DCF with mine to illustrate some slight differences, in this and subsequent posts I won't repeat what's already in their report.

Cos there's really no value in doing that.

Their analyst report is widely available and anyone can go read it. I don't think SG TTI's readers want to come here and read some snippets of repeated data cut and paste from somewhere else, or some superficial unsubstantiated thoughts.

Instead, here I'll discuss some pertinent facts that as far as I can tell, nobody has recognized, brought up, dissected or discussed.

Yet these points, as you'll see, are telling.

I separated this into a post on its own as it's going to be long.

In part I, we've already seen how Dutech has a long term track record of profitability, increasing earnings over the years, growth both organically as well as via M&As and they've done this on the back of minimal debt.

Any debt that resides in Dutech's BS currently comes from their acquired subsidiaries and are not bank loans taken up for acquisitions. 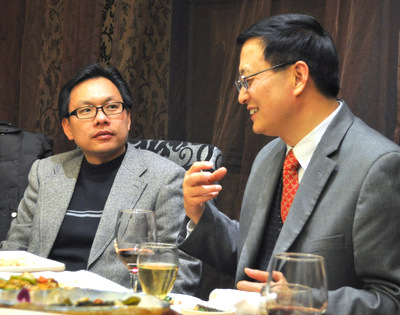 I've also worked out the valuation in Part I by doing a peer comparison, as well as a DCF model. (Yes, I've received a fair bit of feedback from emails and on Investing Note that the share price has risen a bit since Part I, but I'm really talking in terms of much bigger gains than a few % points)

All these are somewhat backward looking though, and since future gains are substantially affected by what the company does in future, here I'll attempt to do the impossible and try to peer into Dutech's future.

Approximately a month from now, Dutech is scheduled to release FY16Q4 and FY16 results. I'm expecting a set of stellar results. By "stellar", I mean at least the 2nd best set of FY earnings in the last 7 years (that's as far back the data I've analyzed), and in all likelihood, record earnings by a mile.

As of 9M16, Dutech's EPS has already exceeded the full year earnings 3 years ago, and is poised to well exceed FY15.

In FY16Q4, Dutech completed its acquisition of parts (most parts in fact) of the insolvent Metric Group. 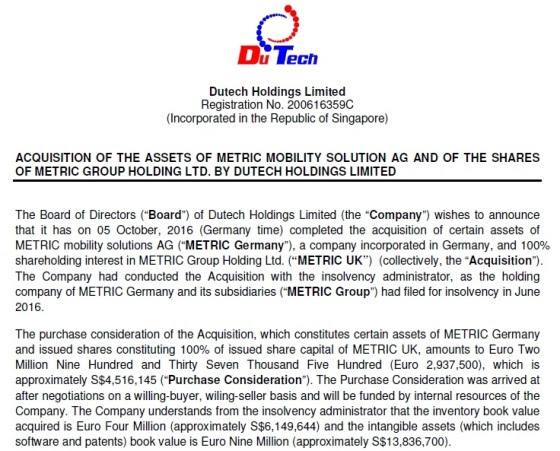 It's no surprise why it's confusing, because the names of the acquired parts are similar, and they changed the name of the holding company just recently.

1stly, it should be obvious at first glance from the announcement, that Dutech got a helluva deal by picking the carcass of an insolvent Metric Group.

Dutech paid up S$4.5mil in cash, which is a tiny chink of the S$69mil in cash and cash equivalents that the company has as of mrq.

In turn, Dutech received S$6.1mil worth of inventory, and intangible assets of S$13.8mil.

But that's typical of insolvency proceedings. The administrator takes over the company, shields it temporarily from creditors, halts the business and sells off all parts as best as they could. The proceeds are then given to the creditors according to the hierarchy rights, and in all likelihood in this case, the shareholders of Metric walked away empty handed.

From the figures above, it'd also mean that Dutech is likely to recognize a one off, extraordinary gain from this M&A in FY16Q4. This is on top of its organic growth (see EPS table above).

Which is why I said I'm expecting stellar results.

Exactly how stellar is this extraordinary gain going to be? Well, I can't tell exactly, cos that depends on how much of the goodwill Dutech's accountants decide to write off.

But assuming they recognise the full sum above, Dutech will recognize a total gain of S$15.5mil, which works out to be... <gasp> about 21 RMB cents more!

I had to rework my figures a few times to make sure I got it right.

If that's true, that's going to blow out the EPS for FY16 to somewhere close to 60RMB cents, which is record EPS by a mile.

Even if Dutech decides to write off some of the goodwill, I can't see how there won't be an additional 20 RMB cents or so added to earnings come FY16Q4 from this acquisition.

Again, bear in mind this extraordinary gain, is on top of the current large jump in earnings in FY16.

Fact: In every quarter of FY16 (Q1, Q2 & Q3) thus far, Dutech's earnings has exceeded the same period in the preceding year by approximately 20%.


For the rest of the article, visit ThumbtackInvestor's blog

We have 998 guests and one member online