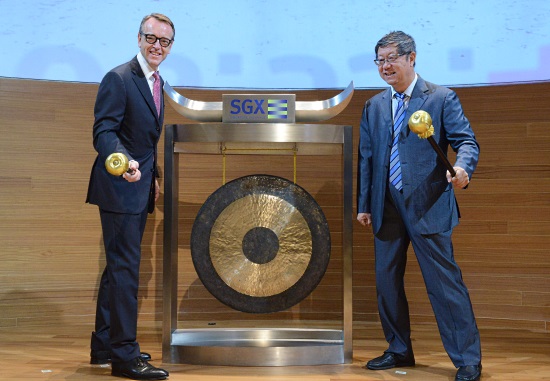 THE INJECTION of China Everbright International’s water treatment assets into Hankore Environment Tech has taken both companies a few notches up the ranks of China’s top water treatment players. 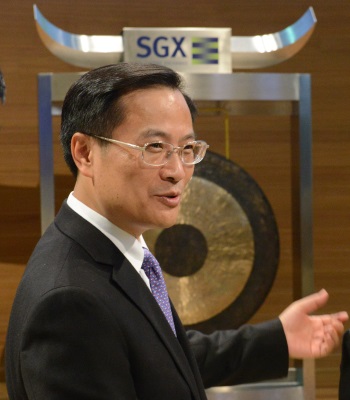 About 5 years ago, he gave up his role as chief of Shandong Academy of Science to join China Everbright International.

He was also deputy mayor of the Jinan provincial capital of Shandong province for 8 years. Before joining politics, he was President of Shandong University and Dean of its faculty of Economics and Management.

“There is huge demand for water treatment projects in China,” said China Everbright Water CEO Wang Tianyi, 52, at a media briefing on 22 December.

Dr Wang was appointed as CEO with effect from 12 December.

He is an executive director and the general manager of Hong Kong listed China Everbright International (CEI).

Dr Wang cited a highly anticipated government plan to spend Rmb 2 trillion to eliminate water pollution in China by 2017 that is expected to be announced around the turn of the year.

This bodes well for the merged entity. Before the merger, China Everbright International had a water treatment capacity of about 2 million tons a day, while Hankore had 1.6 million.

With a combined water treatment capacity of 3.6 million tons a day, the entity is about the size of SIIC Environment, one of the top 10 players in China.

Dr Wang cited 3 factors that he considers critical for the success of a water treatment player: financing ability, wastewater discharge standards, and ability to collect receivables.

While the water treatment industry in China is huge, the highly capital intensive business is challenged by relatively high financing costs in China. 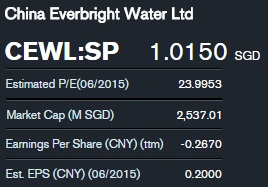 Data: Bloomberg“Listing the merged entity in Singapore allows us to tap on an additional capital market,” said Dr Wang.

He also pointed out that being state-owned gives the Group a strong competitive advantage when bidding for municipal wastewater treatment projects.

» Firstly, even though foreign environmental companies are large and technologically advanced, they face challenges in obtaining financing in China.

» Secondly, SOEs are in a favorable position when negotiating for better water treatment tariff rates.

CEI's parent company is China Everbright Group (CEG), a state-owned enterprise under the supervision of the PRC State Council, meaning that CEG is of political significance that is equivalent to Temasek Holdings in Singapore.

A second thing about Singapore that attracted CEI is the large presence of leading water treatment research institutions that the Group may work with to improve its water treatment capabilities.

The Group's niche is in the design, construction, operation and maintenance of municipal wastewater treatment plants, which has the largest market demand.

As the PRC government is implementing more stringent industrial wastewater discharge standards next year, the Group intends to extend its capabilities to address this growing market.

Industrial wastewater treatment has potential to yield higher return on investment as it requires more advanced technology, such as the use of membrane.

However, private industrial companies may not be as credit worthy as the municipal governments.

"Being in industrial wastewater treatment is a demonstration of the technological prowess of the BOT solutions provider," said Dr Wang.

We have 2392 guests and no members online