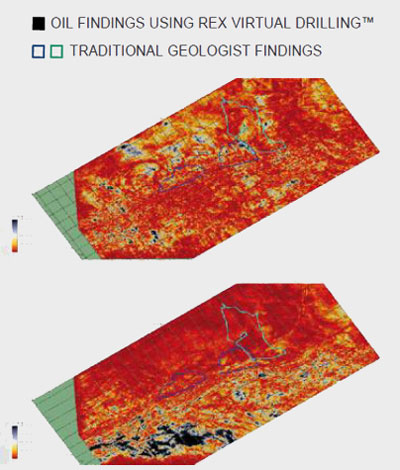 Rex Virtual Drilling shows exact locations of oil reservoirs, compared to estimates outlined by traditional methods.
Visuals from company.Rex International said the drilling of exploration well 16/1-25S under the North Sea licence PL338C has been completed as an oil discovery.

The discovery was made by operator Lundin Norway at the Rolvsnes exploration well south of the Edvard Grieg oilfield in the central North Sea sector of the Norwegian Continental Shelf.

“This is the first time that Rex Virtual Drilling was applied in this kind of rocks, where the calibration was uncertain. We had identified the key risks associated with the Rolvsnes well to be the irregular porosity and permeability distributions in the unconventional weathered and fractured basement reservoir,” said Rex’s Chief Operating Officer, Mr Svein Kjellesvik.

“The good alignment of Lundin's conventional geological and geophysical prognoses with those of Rex Virtual Drilling, which identified this discovery, strengthens our belief that Rex Virtual Drilling is a powerful tool in reducing exploration risks,” he said.

Lime Petroleum Norway AS, which is effectively 98.77%-owned by Rex International, has a 30% working interest in PL338C.

Lundin Norway has a 50% working interest while OMV (Norge) AS has 20%.

Lime Petroleum Norway also has 30% participation in nearby licences (PL544 and PL410) operated by Lundin. The Fosen prospect in PL544 is scheduled to be drilled in January 2016.

Aside from Norway, Rex has stakes in exploration assets in the Middle East, the US and Trinidad & Tobago.

These offshore and onshore concessions cover an aggregate of over 26,000 square kilometres in regions known for previous oil and gas discoveries.

We have 835 guests and one member online