S'pore Market is Alive and Kicking - S$12 B in Deals; Views from the IR Perspective

Table 1: Total Number of Completed Deals and Value in the Region

M&A Activities in Singapore Many corporate advisors are citing increasing merger and acquisition (“M&A”) activities in privatisations and reverse take-overs (“RTO”) due to better valuation and more realistic expectations. During the past 12 months, the total size of company takeovers stands at a staggering S$3.9 billion while a single privatisation deal accounted for S$186 million in the same period. Completed cross border deals champions the cause generating around S$5.4 billion through 121 transactions in the last 12 months. The cross border numbers fortifies the fact that Singapore remains a prime financial destination in the region. 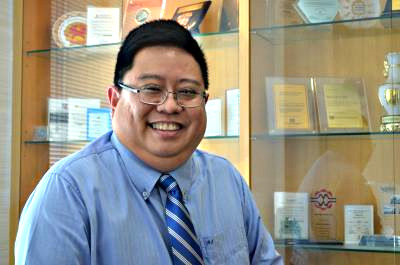 Robson Lee, Partner, Gibson Dunn & Crutcher LLP, a global law firm headquartered in the USA. NextInsight file photo.“M&A activities in Singapore are still very vibrant! Despite equity markets in the region going through a correction phase, there are always opportunities for listed companies to consider through M&A, industry consolidation and corporate restructuring etc. For example, listed companies can even consider delisting and to restructure without the burdens of a listed company. After which, the said company can relist later to take advantage when equity markets recover,” proposed Robson Lee, Partner of Gibson Dunn & Crutcher.

Table 2: Total Number of Completed Deals and Value in Singapore 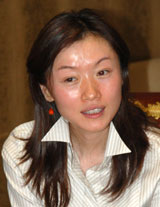 “According to our IR survey, majority of companies that participated reported an annual IR budget of S$50,000 to S$100,000. Transactional IR is growing in importance over time. Our firm has assisted many projects in tandem with corporate advisors covering M&A, privatization and cross border transaction etc.,” commented Ms Kathy Zhang, Group Managing Director of Financial PR Pte Ltd (“FPR”).

The scope of an IR firm these days has grown beyond bridging the gap between listed companies and their shareholders. Today, the IR function has evolved from managing relationships with analysts to advising listed companies in their fund raising communication.

Understanding the nature of the deal in terms of the business, the legal risk and the financial impact is paramount in communicating the right message to the market, media and investors. To cite an example, many times we have seen misguided investors questioning a company’s recent acquisition via issuing new shares resulting in an earnings dilution. Therefore communicating the company’s rationale is key to a successful share placement exercise. 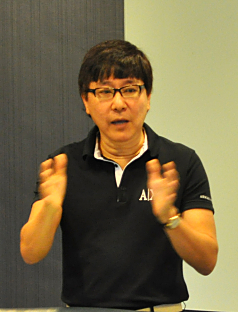 Henn Tan, CEO of Trek 2000.
NextInsight file photo.“It is important to engage the investment and media community proactively. With a strong belief in transparency and disclosure, we work with our investor relations team to communicate consistent key messages and positioning to the investment market. As a listed company, we strive to enhance shareholder value through capitalising the equity market. To that end, we recently completed a placement exercise where we forged a new partnership and raised S$11.6 million to grow our war chest to accelerate growth,” echoed Henn Tan, Chairman and CEO of Trek 2000 International Ltd.

A survey was conducted by FPR, a 5 times winner of Singapore Prestige Brand Award, among listed companies on SGX to gain more valuable insights.

Andrew Chow, head of research, UOB Kay Hian“Through primary research, we undertake a vigorous process to discover undervalued stocks by valuation screens, company meetings, site visits and industry analysis. However, there are still certain inefficiencies in the form of information gap between listed companies and their investors. Listed companies who are more proactive and forthcoming in their IR approach would allow analysts to better understand and appreciate their business strategies, directions and decisions and that in turn would help analysts in performing their role. This is extremely critical in the formation of the share price discovery process,” commented Mr Andrew Chow, Head of Research of UOB Kay Hian.

A significant 100% of Big Caps conduct analyst briefings regularly. Thus, Big Caps are very well covered by both local and overseas based investment analysts. Currently, 82% of the Mid Caps conduct analyst briefings while 18% chose to conduct none at all. Notably, 65% of the Small Caps organize analyst briefings from time to time while the remaining 35% do not. Perhaps, this helps to explain their focus in gaining more media coverage and subsequently analyst coverage in the long run. At the same time, majority of the Small Caps faces certain challenges in gaining analyst coverage. About 50% of the participants think that the main reason is either capitalisation or trading liquidity are too low to appear under the radar of the analysts. This brings us back to the question why Small Caps are much more willing to spend and gain coverage. 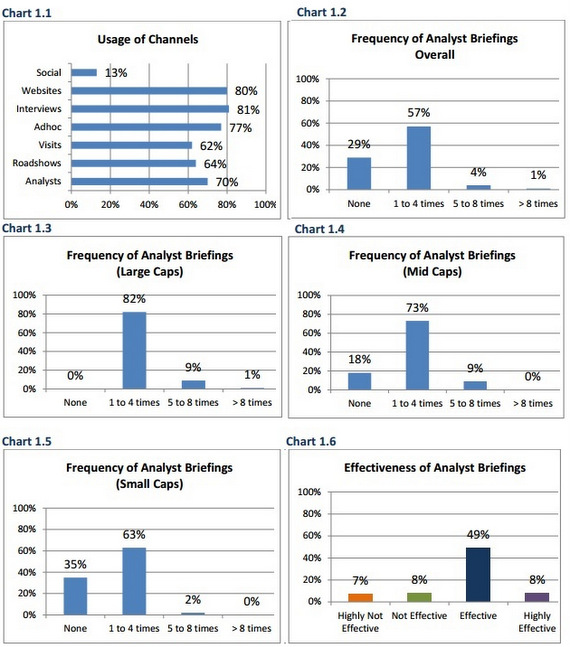 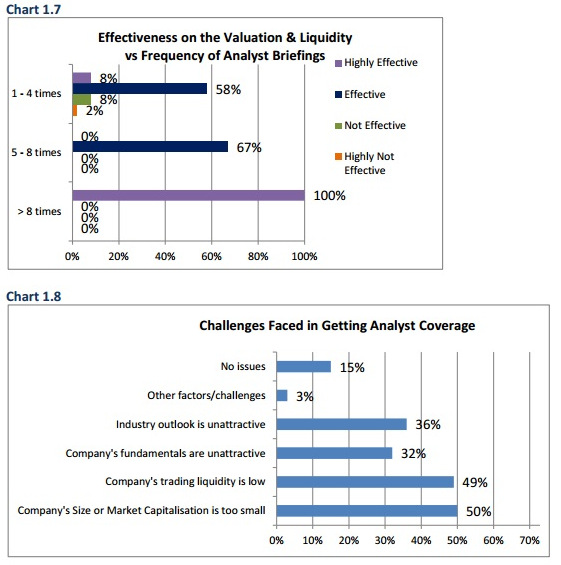 2) Attracting Institutional Investors
Seen as No.1 importance for IR Activities The key objectives of listed companies vary across Big Caps to Small Caps. 50% of the respondents believed that attracting institutional investors are important in their overall IR strategy. Contrary to popular beliefs, only 36% of the listed companies surveyed rank ‘attracting retail investors’ as an important objective.


Big Caps are more active in conducting ad hoc investor meetings and teleconferences more than 8 times annually. Big Caps have a large following of index-linked funds, unit trusts, exchange traded funds (“ETFs”) hedge funds and other institutional funds etc. Most major funds have a self-enforced market capitalization mandate to invest in SGX listed companies. Therefore, it is imperative for companies seeking institutional investors to maintain a certain market capitalization size and trading liquidity level. On top of that, 73% of the Big Caps have hosted a minimum of 1 to 4 company site visits for the analysts and funds. 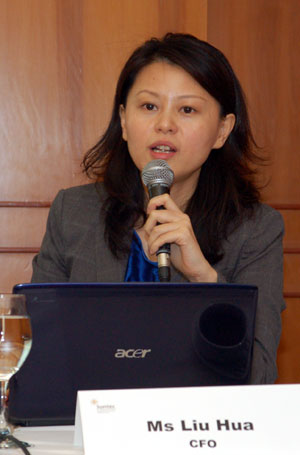 CFO Liu Hua. NextInsight file photo.“Yangzijiang has always kept high focus on timely dissemination of information and has maintained high standards of transparency, disclosure, IR and communications. We work with FPR to regularly host analyst briefings and also engage institutional investors so that the market is regularly updated on the company’s progress. We feel that meeting analysts and investors and addressing all their concerns regularly is highly essential as we want the correct message and the relevant facts to be known to the market in a timely manner. Our Chairman and CEO make the effort to fly to Singapore at least once a quarter and attend the company’s quarterly results briefings, road shows, media interviews and investor meetings. We intend to keep this tradition on-going and hope that the market will continue to appreciate our IR efforts,” commented Ms Liu Hua, Chief Financial Officer of Yangzijiang.

Furthermore, 42% of the participants yearn for more media coverage. Amongst the respondents, 76% of the Small Caps conduct at least 1 to 4 media interviews per year to drum up interest in their respective companies. Getting more publicity in mainstream media from time to time can be instrumental in promoting the company to analysts and investors who have not heard about the company. 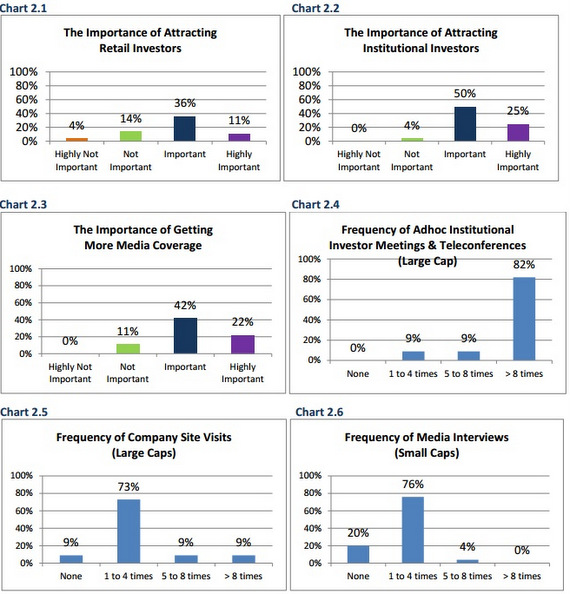 3) Small Caps Spend More than Mid Caps
By comparing the annual budgets on IR, Small Caps tend to spend more than the Mid Caps. Interestingly, 64% of Mid Caps spend less than S$50,000 per annum while 59% of Small Caps spend more than S$50,000 per annum in their quest. This is primarily due to Small Caps placing a high emphasis on gaining media coverage to improve their companies’ market capitalization and trading liquidity. Some Small Caps would also like to create more awareness for their company’s brand and image through more publicity. Small Caps generally has a desire to gain more recognition as compared to their larger peers. On the other hand, Big Caps naturally has bigger budgets and spend the most among listed companies for their IR activities. 54% of Big Caps spend more than S$100,000 per year in conducting IR activities! In contrast, Mid Caps remained lukewarm in their approach towards effective communication to the investing community. 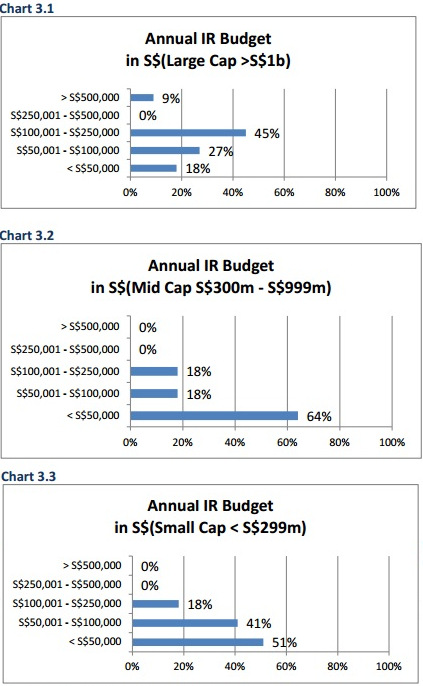 Moving Ahead
Other than M&A activities, other financing activities have also started to gain some traction going well into next year based on a healthy pipeline of IPOs, additional share placements and rights issue exercises. From the period 1 st October 2014 to 1st October 2015, the Singapore Stock Exchange’s (“SGX”) Main board and Catalist board have both managed to list 17 IPOs raising total proceeds of approximately S$762.6 million. However, many newly listed companies prefer to list on the Catalist board. Surprisingly, additional share placements have accounted for S$1.0 billion while rights issues have raised a total of 2.8 billion in the past 12 months. Contrary to popular beliefs, Singapore market is truly buoyant and forging forward.

“We continue to have a healthy pipeline of companies seeking to list on SGX, with the majority of our new mandates coming from overseas companies. Catalist-listed companies tend to benefit from more participation from institutions and high net worth individuals, improved liquidity with higher turnover velocity, wider access to capital via placements, rights issues and medium term note (MTN) programs. Given the challenging and volatile market conditions, it is critical that listing aspirants work closely with their sponsors and investor relations firms to clearly communicate their business model and future plans to shareholders and external stakeholders,” commented Mark Liew, Managing Director of Prime Partners Corporate Finance.

Table 5: Total Number of IPOs and Offer Size in Singapore

We have 1411 guests and no members online