Midas Holdings: Disappointing 3Q14 results amid uncertain outlook
 Sharp increase in expenses
 Uncertainty over new business
 Downgrade to HOLD
PATMI hurt by jump in start-up and finance costs
While 3Q14 revenue grew 7.7% YoY to RMB324.2m on the back of higher revenue from its Aluminium Alloy Extruded Products Division, Midas’ PATMI plunged 91% to RMB1.5m due to higher start-up and finance costs arising from its new plants. These were due to higher administrative and finance expenses, which jumped 42.1% and 117.0% YoY to RMB36.5m and 35.5m, respectively, eroding the 6.2 ppt gain in gross profit margin to 27.0%. 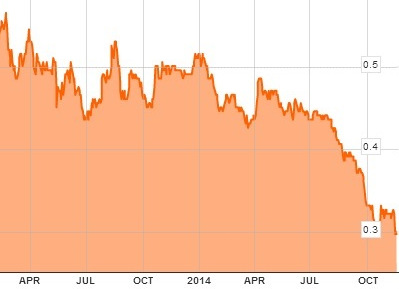 Midas' share price (29 cents) has lost about half its value since the recent peak in 2013. Chart: BloombergA 96.9% YoY drop in the share of profits of an associate also contributed to lower PATMI. For 9M14, Midas’ revenue rose 21.6% to RMB957.3m, but PATMI dropped by a significant 19.3% to RMB21.3m, and these formed 70.5% and 56.2% of our FY14 projections, respectively.
Uncertain outlook for its aluminium light alloy business
Of the two new plants in Luoyang and Liaoyuan, the latter was part of its strategy to diversify away from its reliance on China railway projects by going into aluminium plates and sheets production through its subsidiary, Jilin Midas Light Alloy (JMLA).

Midas is targeting to commence production for its Luoyang and Liaoyuan plants in 2Q15 and 4Q15, respectively. Until then, start-up expenses will continue to drag down earnings without topline revenue contributions. When commercial production starts, capitalized finance costs will further impact profit through depreciation expenses.

Meanwhile, JMLA has yet to secure contracts. Being the supplier of basic materials, we expect the business model to be low margin and high volume. The outlook remains uncertain on JMLA’s ability to gain market share in this competitive market. Hence, we expect revenue contribution to be slow in 2015 and will not be able to offset its operating expenses meaningfully.
Lower estimates; downgrade to HOLD
With the reasons mentioned, we think earnings will continue to be subdued for the next 12-18 months. Hence, we cut our FY14F and FY15F PATMI forecasts by 33.4% and 38.2% respectively.

We have 1166 guests and one member online