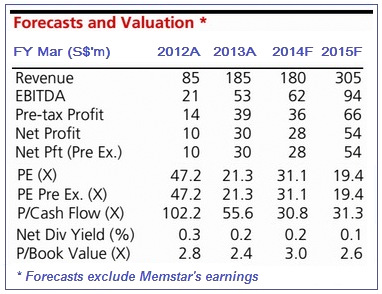 FY15 is shaping up to be a banner year for EPC. UENV has won another EPC contract worth RMB250m after securing a RMB160m BOT agreement two days ago.
UENV has clinched c.RMB877m of EPC contracts so far in FY14. More order wins are possible as RMB500-600m of contracts are in advanced bidding stages.

Based on new win assumption of RMB800m (from RMB400m previously) in FY15 and 12-18 months completion timeline, we estimate that EPC’s revenue could almost double to a record high of S$199m in FY15.

This is 63% higher than our previous EPC sales forecast of S$122m.Memstar is a key catalyst to earnings and value. Assuming 20% growth on Memstar’s annualised FY14 June YE PATMI, underpinned by a potential increase in orders from a major customer, we estimated that Memstar could generate S$16m net profits in FY15. 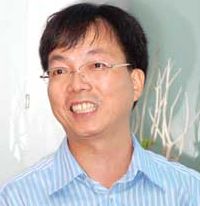 Investors with a medium term horizon should take advantage of pullbacks to take position in the stock, which could see upside from stronger-than-expected earnings from Memstar or contract wins.

A potential tie-up or partial takeover by a bigger entity is also possible, considering the growing participation of SOEs in the water sector. On the contrary, risks on the downside would be failure to complete the Memstar acquisition or a significant shortfall in EPC wins. 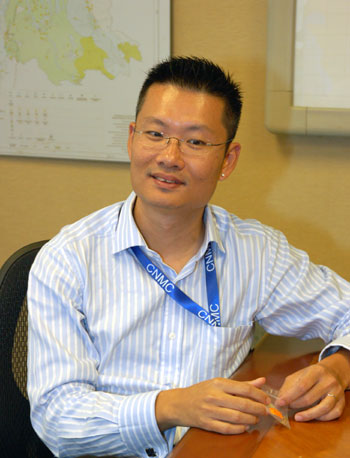 We reiterate our highly positive outlook on CNMC on the back of increased production following the completion of leaching pad 2 in Sep 2013. Maintain Increase Exposure.
Reiterates Record Gold Pour in Nov: We recall that CNMC successfully commissioned its second gold de-absorption plant in Nov 2013, following record gold pours of 2,131oz (or 66.3kg) of gold dore bars from the new plant. 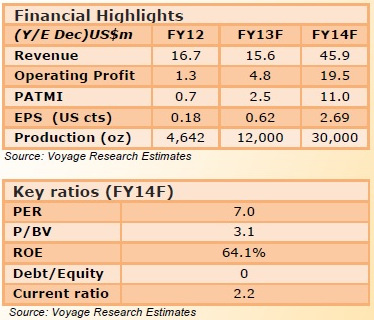 Gold Prices Remain above Model Input: Spot gold currently trades at US$1252/oz, which remains above the input gold price of US$1200/oz which we applied towards our forecasts and valuation of CNMC.

We are unfazed by lower gold prices, as falling unit costs and higher production are expected to more than offset price declines.

We have 350 guests and no members online