SINGAPORE-LISTED IT SUPPLIER ECS Holdings -- an 89.5% owned subsidiary of VST Holdings (HK: 856) – managed to boost its 2012 revenue by 1.0% to 3.64 billion sgd, driven by more contributions from its higher-margin Enterprise Systems segment.

However, revenue for the Distribution segment declined 6.1% to 2.50 billion sgd in FY2012 mainly due to lower sales of desktop PCs, notebooks and imaging products, partially offset by growth in sales of mobility devices, reflecting both the economic uncertainty and the clear shift in consumer IT patterns globally.

“ECS revenue has continued to grow even as we position ourselves for the consumer shift towards mobility devices instead of PCs.

“We are encouraged by the growth of the Enterprise Systems segment, especially in the fourth quarter, and will continue to focus efforts to strengthen momentum in this higher-margin business,” said ECS Chief Executive Officer Mr. Ong Wei Hiam.

Gross profit margin narrowed to 3.9% from 4.6% over the comparative period due to the change in sales mix which resulted in higher revenue contribution from lower-margin mobility devices in FY2012.

ECS has proposed a first and final dividend of 2.2 cents per share, representing 27.2% of the profit attributable to shareholders.

Mr. Tay Eng Hoe, ECS Group Executive Chairman, said: “Going forward, the Group will focus on emerging markets such as China and Indonesia to drive revenue and profitability growth in 2013. In addition, the Group will continue to strengthen working capital management, as well as improve operating and financial efficiency.”

In view of the uncertainties in the overall global macro-economies, ECS management said it is “cautiously optimistic” about its performance in 1Q13 and FY2013.

China New Town specializes in suburban residential projects.
Photo: CNTDCHINA NEW TOWN Swings To Big ProfitCHINA NEW TOWN Development Company Ltd (HK: 1278; SGX: D4N) boosted its revenue 46% in 2012 to nearly 935 million yuan.This led to a bottom line swing to a net profit of 45.7 million yuan from a loss of 233.2 million a year earlier.“Our results of operations are primarily driven by the frequency and achieved selling prices of public auction of land use rights. During the financial year, four saleable land parcels were successfully auctioned and sold in our Shanghai Luodian project and Wuxi Hongshan project.“Therefore, the revenue and the operating profit of the Group have increased by 46% and 186%, respectively, compared with 2011,” said CFO Cai Lijun.He said CNTD’s secondary property development entered into a phase of completion and began delivering to customers.In 2012, 2,619 square meters of its upscale Lake Malaren Silicon Valley Project in Shanghai were completed.

“Due to the successful hosting of 2012 BMW Masters Golf tournament and 2011 Lake Malaren Masters Golf tournament in Lake Malaren of our Shanghai Luodian project, the golf operations recorded revenue of 86 million yuan in 2012 compared with 59 million in 2011, up 47%,” Mr. Cai added.In 2012, hotel operations and investment property leasing operations recorded revenues of 65 million yuan and 11 million, respectively, which were up by 39% and 176% year-on-year.“The performance substantially benefited from the successful hosting of the Tournament.”Overall, cash and bank balance (excluding restricted deposits) decreased by 118 million over the year with a balance of 229 million at end-2012, which is mainly attributable to a decrease of 24 million from operating activities and a decrease of 131 million from finance activities offset by an increase of 38 million from investments.The gearing ratio was kept unchanged at 46%.Policy Push“2012 was a year of great significance in the history of China’s urbanization development. The 18th National Congress of Communist Party of China was successfully held in November and the new central leadership was elected.“The 18th NCCPC report stressed urbanization on numerous occasions,” Mr. Cai said. 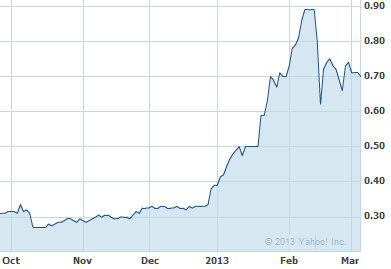 CNTD's Hong Kong-listed shares have had a very good winterHe added that the political meeting also set the target to double the country’s GDP by 2020 and emphasized the importance of following the path of carrying out industrialization in a new way and advancing IT application, urbanization and agricultural modernization with Chinese characteristics.“As Li Keqiang, one of the new leaders, pointed out, China’s economic growth in the future must rely on domestic demand instead of exports, and urbanization will be the major driver of domestic demand.“Over the next decade, China will speed up its urbanization process,” Mr. Cai added.According to the data of National Bureau of Statistics of China, China’s urbanization rate climbed steadily to 52.6% in 2012, up 1.3 percentage points compared with 2011.“As such, despite the continuous macro curbing policy on the real estate sector for the third consecutive year, China’s urbanization development pace has never slowed down.”Based on the 18th NCCPC report and as predicted by experts and scholars, the urbanization rate of China will surpass 60% in 2020.“Undoubtedly, the targets mentioned above will provide tremendous opportunities for China’s urbanization development as well as the long-term sustainable development of the property market.”

CNTD recently 0.72 hkdBeing a pioneer in China’s new town development, CNTD mainly engages in clearing and preparing land and development of new towns while undertaking joint development projects in primary and secondary property market according to circumstances.“Looking forward to 2013, we are fully aware of the huge challenges and opportunities in the course of China’s urbanization development.“We believe, as a result of urbanization progress and under existing policies, the primary land market will trend towards being more rational and consumer demand focused. The new town development projects of CNTD can fit into the economic trends and strategic development of the country and realize maximum value.”Mr. Cai added that CNTD is currently in discussions with several independent third parties regarding possible investment in the Hong Kong- and Singapore-listed firm in the form of subscription of new shares.