Terence Wong, head of research, OSK-DMG.S-chips have been severely battered since 2008 following a series of corporate governance/accounting irregularity issues, and have yet to recover.

The segment made an attempt to pick up in 2011, but before it could get back on its feet, it was hammered by problems surrounding China Hongxing and China Gaoxian, two prominent China-based companies.
We see a game changer that may turn sentiment around. The recent tie-up between the Singapore Exchange (SGX) and the China Securities Regulatory Commission (CSRC) may just be the catalyst to spark interest in this battered group of 140 stocks.
SGX and CSRC announced that they will establish a direct listing framework for companies from China to list in Singapore.

We think that this will boost confidence in future S-chips that are looking to list in Singapore.
On another front, China’s stock market - which partially drives sentiment in S-chips - is starting to look interesting after having underperformed the other major markets over the past six years. In Sept 2012, regulators imposed a moratorium while rules were being drafted to curb price manipulation.
This move stalled close to 800 companies which had been ‘queuing up’ for a listing. Following China’s decision to end the 15-month freeze on lPO listings, there are expectations of a flood of new listings in 2014.

There are also talks that there could be as much as USD11bn in share sales in the first half. As such, liquidity is expected to return in a big way in 2014. 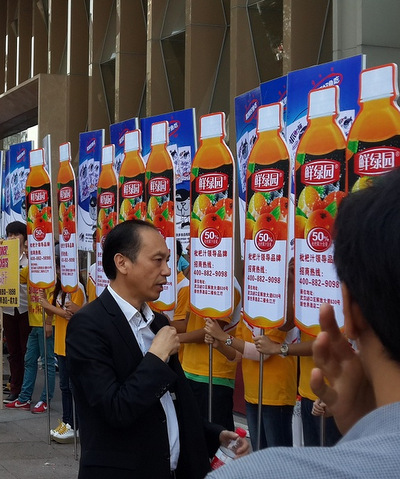 Loquat juice is the key beverage sold by Sino Grandness whose CEO, Jack Huang, is seen here at a F&B trade in Hubei recently. Photo: CompanySome of the sectors that we like among the S-chips are Consumer, Infrastructure and Environment.

The first two sectors excited us in the past year, with our top picks being consumer play Sino Grandness (BUY, TP SGD0.88) and railway supplier Midas Holdings (BUY, TP SGD0.75).

Sino Grandness has surged more than 3x since our upgrade in November 2012, becoming one of the market’s best performers.
While Midas didn’t do as well, its >20% stock price rally over the year was still respectable.

We think there is more to come from both stocks going forward. As it is the Chinese Government’s key priority to clean up the environment, the prospects of companies in this sector are looking very bright indeed.

Already, we have seen the stock price of SGX-listed China Environment (NR), a manufacturer of industrial waste gas equipment, surge more than 6x since its low in March 2013. We will be initiating coverage on this sector shortly.
All said, we would advise staying away from China property counters as a result of an explosion of upcoming IPOs in the mainland that is likely to soak up liquidity from the property market.
How to play this theme: Our S-chip favourites from 2013 should continue to perform well, with catalysts for both Sino Grandness (beverage unit gets approval to list in HK) and Midas (big railway orders).

Environment plays will feature strongly in 2014 and will become the sector to watch for the next few years.

SINO GRANDNESS: How did it achieve sparkling beverage sales in 3Q?

We have 440 guests and no members online