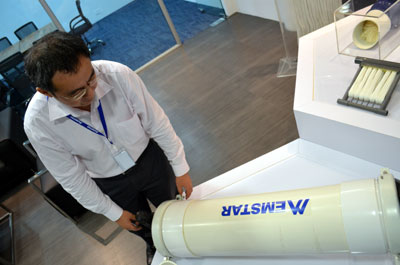 Hollow fibre membranes are packed into cylinders through which waste water is filtered. The surface area of the membranes is equivalent to 55 sq m if laid out side by side. In the picture: Dr Ge Hailin, the CEO of Memstar, at the company's premises in Bt Batok. Photo by Sim KihMEMSTAR TECHNOLOGY, which manufactures membrane products for mostly China water projects, has just done something surprising: It set up a plant in Singapore.

We visited its facility recently, which was just about six months after Memstar took over the site in an industrial estate on Bukit Batok St 22.

It is not the sort of massive building commonly seen in the premises of China manufacturers. But the production is largely automated. We saw a handful of workers manning the 10 production lines but these are not in full production yet. 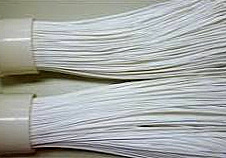 Hollow fibre membranes.
Photo: MemstarThe production process involves mainly the new "third-generation high-performance PVDF hollow fibre membranes." We did not photograph the production process for intellectual property protection.
As is well known, intellectual property in Singapore is more secure than in China, which is partly why Memstar chose to do manufacturing in Singapore. In addition, the Memstar operations benefit from Singapore's comparatively lower tax rate.

China still has an important role for Memstar's manufacturing work. After the relevant components are produced in Singapore, they are shipped over to a plant of Memstar's in Sichuan province for the more labour-intensive work which involves chemical treatment, among others. 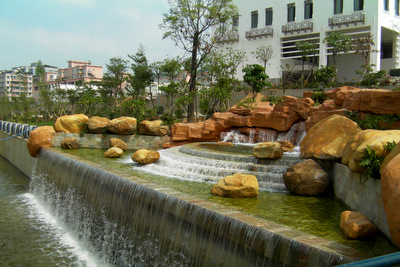 Memstar's membrane bioreactor (MBR) technology at work in this Guangzhou city plant which was completed in 2010. Wastewater is treated and then discharged (picture) into the natural environment. Photo: MemstarThe end products are mainly for the domestic market: In FY2012 (ended June), China customers contributed 94% of Memstar's RMB184 million of revenue.

Memstar, however, is growing its presence in the international market, especially after achieving an OEM contract for a Japan-headquartered client (more on this later). It has also supplied directly to customers in Malaysia, Taiwan and Australia.

Aside from being a production site, Memstar's Bukit Batok facility also houses its HQ and R&D centre whose staff includes a
number of internationally known scientists and experts in the fields of membrane technology and water treatment technology.

Memstar's stock, which is listed on the Singapore Exchange, is actively traded and sports a trailing PE of 16-17X, based on a recent stock price of 9.3 cents. The market capitalisation is about S$247 million. 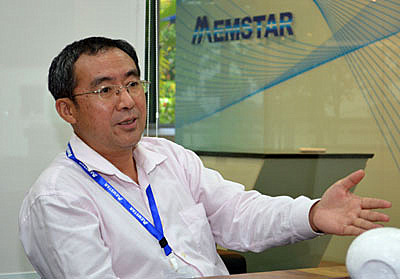 Dr Ge Hailin, CEO and founder of Memstar: Born and bred in China, now a Singapore permanent resident. He was a membrane research scientist in Australia, where he achieved a doctorate, when the Singapore EDB recruited him. Photo by Sim KihHere are some other takeaways from our meeting with Memstar CEO Dr Ge Hailin and financial controller Yeo Hui Lian:

> Key showcase:  Memstar's membrane products are used in a wastewater treatment plant in Guangzhou, which is China's largest project using membrane reactor technology. The plant (picture above) was completed in 2010 by Singapore-listed United Envirotech.

With a capacity of 100,000 cubic metres a day, it is the first and largest underground MBR plant in Asia.
> Strategic partner: Since January 2013, United Envirotech has owned a 13.2% stake in Memstar Technology through purchasing shares from Dr Ge and Memstar chairman Pan Shuhong. The duo now own an aggregate of 36.5%. 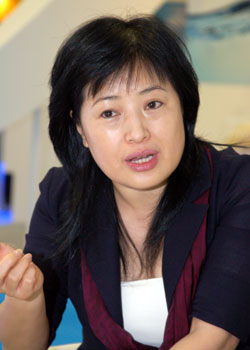 Memstar chairman Pan Shuhong: China-born, now a Singapore citizen. NextInsight file photoUnited Envirotech has been the biggest customer of Memstar in the past few years. (The 2012 annual report states that two customers accounted for RMB136.4 million, or 74%, of Memstar's revenue).

Having United Envirotech as a shareholder and strategic partner does not deter other water treatment players from buying membrane products from Memstar.

Part of the reason is that membrane products account for roughly only 10% of the total cost of a project, so it's not a determining factor when water treatment companies bid for a project.

Memstar and United Envirotech have jointly invested in 3 water treatment plants in China. A fourth one has recently been announced.

> OEM supplier: Memstar last year became an OEM supplier -- the only one in fact - to Hydranautics, a global leader in membrane products and is wholly-owned by Nitto Denko Corporation which is headquartered in Japan.

Hydranautics distributes the OEM membrane products to various parts of the world, including Israel, Italy, Russia, Spain, Taiwan and Singapore. Memstar intends to achieve OEM contracts with other customers.

Aside from water treatment, Memstar's membrane products are used in separation processes it the food, pharmaceutical, chemical, power generation,petroleum industries.


With strong growth potential in the global water sector, Memstar is stepping up efforts to drive its international business and widen its OEM customer base globally.

> Use of membranes: For treating municipal wastewater in China, membrane usage is probably at a low single-digit percentage, said Dr Ge. In comparison, the figure is over 50% in Singapore, which is probably the only country in the world with such high usage -- and the reason is its decision to treat wastewater to produce Newater.

> Competition: In China, four or five membrane manufacturers have emerged strongly. Worldwide, there are a handful of big names, including Siemens, GE, Asahi, Dow Chemical, Nitto Denko and BASF.

> Recurring income from membrane replacement: It is recommended that membrane products for water treatment plants be replaced after 4-5 years.

Currently, Memstar derives single-digit percentage of revenue from replacement business with its previous clients. However, this potentially can grow into a strong revenue stream in the years ahead as systems installed for clients age.

We have 1294 guests and no members online