The following article was posted on www.nracapital.com yesterday, and is reproduced here with permission.

YESTERDAY (Aug 1), United Envirotech announced that it has entered into an agreement with KKR to issue the latter US$113mn in Convertible Bonds with an annual coupon of 2.5% for five years.

The shares of United Envirotech rose yesterday to S$0.38 on the announcement. 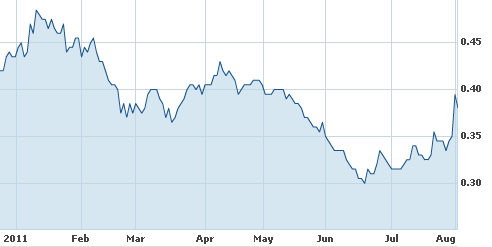 United Envirotech's low for this year was 30 cents in June and it has since recovered to close at 37 cents recently.

This morning I noticed some volume in Memstar shares and wondered whether investors were assuming that Memstar could be another target for private equity investors.  Its possible because its in the same industry as United Envirotech but what would the price be if such an event did occur ??!! (ITS PURE SPECULATION on my part).

If it does happen with Memstar then investors should be looking at a similar premium if they use the premium to NAV method.   The price could also be determined using a notional PER - based on historic data - Sinomem's PER was 12.9 (according to Bloomberg) at S$0.70 and for United Envirotech the notional PER at $0.45 would be 11.3.

So before you jump into Memstar shares have a look at these numbers and see if these numbers make sense if and when such an event were to occur.  Happy trading....

We have 377 guests and no members online