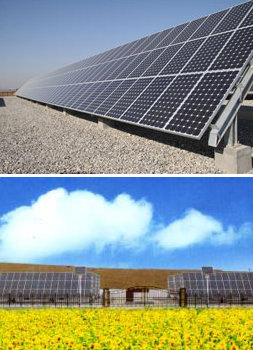 Could mid-cap new energy firms be powering up to lead the next market rally in Greater China?  Photos: Solargiga

The new year is fast approaching, so it's time to take a look at the main investment themes in China’s capital markets for 2013.

And if you know where to look, and at what point, then there are already signs emerging in the market that offer investors a crystal ball perspective on where share prices and sentiment might be heading next year.

Although there was little to bring cheer to A-share markets for most of 2012, October did bring a few gifts in its wake.

For the month, fixed asset investment (FAI), consumer spending, industrial output, corporate earnings and the all-important barometer of factory activity – the PMI – were all trending stronger.

In fact, the whole battery of economic indicators has on the whole been showing newfound signs of vitality, suggesting that the overall economy is getting back to its former vigor.

This also suggests that the unimpressive growth seen in the third quarter is now behind us, and things are heating up again.

Signs of stronger economic performance come not a moment too soon for the millions of A-share investors who have not only been sitting on shares with depressed valuations waiting for the right time to sell.

But with the hint of a stronger economy in the air, especially as fall turns to winter and the new year awaits just around the corner, the possibility of a bull run of any duration is increasingly likely over the near- to mid-term.

That is not to say, however, that all is well in the investment community.

In China, there is some trepidation about the recent political events in both Beijing and Washington.

In the latter, there is growing concern that the reelection earlier this month of President Obama will push the world’s biggest economy closer to the brink, and maybe over the edge, of the proverbial “fiscal cliff.”

If that were to happen – and the incumbent being given another four years makes it an even greater likelihood – then the US would almost certainly be unable to avoid plunging into negative growth... ie: a recession.

October was not a total loss for China shares

And despite all the talk about “de-coupling” in China – codeword for lessening dependence on the American consumer for Chinese growth and focusing more on the Chinese consumer herself – the PRC’s economic juggernaut remains dangerously joined at the hip to the vagaries of external demand.

So whether the US falls back into recession or not, investors should be rooting for the Chinese consumer to save less and spend more.

That will be the best immunity from the next global slowdown – a relatively untapped marketplace 1.3 billion shoppers strong to help buoy A-share firms looking to make a few sales on the homefront.

And speaking of the homefront, last week’s leadership transition in Beijing ushered in a new generation ready to take the helm of the world’s No.2 economy and most populous nation.

Markets have a morbid fear of change and instability.

But so far there is no indication that the new crop of leaders in China is planning to take the country’s economy in a drastically different direction.

In short, that is exactly the sort of news investors were hoping for from Beijing – if it’s not broken, don’t fix it.

All things considered, the fact that A-shares have several members at or flirting with historically low prices also makes a comeback all the more likely.

And the fact that “traditional industries” are comprising an increasingly smaller part of the A-share landscape means that “new energy,” biopharm and innovative technology firms will be playing a bigger role in the inevitable recovery.

Their market caps make for more flexible adjustments, and their share structuring also allows for much larger potential daily jumps (of falls).

So don’t be surprised if the blue chips take a back seat to a new class of innovative mid-caps which could very well be at the forefront of a stronger 2013 for investors in China’s capital markets.

We have 602 guests and one member online