Management of the Hong Kong-listed enterprise said a key tieup with a major mainland energy giant is helping its cause. 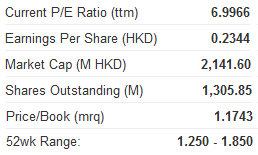 “We are experiencing strong demand for LPG products from our industrial customers on the back of more long term supply contracts with the customers. Also, the collaboration with Sinopec Guangzhou is anticipated to provide us with more opportunities to expand our product range and increase our customer base,” NewOcean Managing Director Lawrence Shum recently said.

Revenue in the January-June period jumped 9.34% to just under six billion hkd mainly due to strong and sustainable demand in Southern China for energy products.

Phillip Securities has a target price of 2.16 hkd on New Ocean Energy. 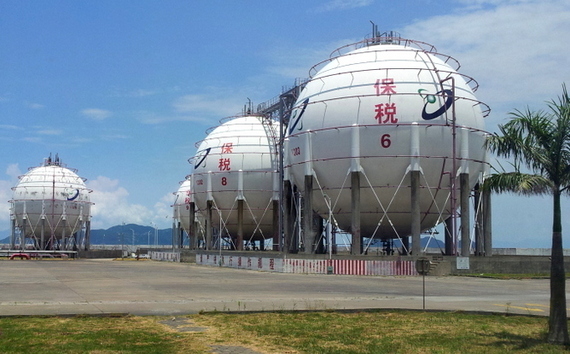 NewOcean Energy Holdings Ltd is the largest LPG operator in the South China region. The Company wholly owns and operates a Class 1 LPG sea terminal in Zhuhai, China for VLGCs (Very Large Gas Carriers) through which it conducts its international importing and re-exporting businesses and domestic wholesaling.

The sales to end-users market in China is conducted in China by the Company through a network of 16 bottling plants in 11 cities and is joined by a further network of 17 autogas refueling stations in and around Guangzhou.The retailing network has been expanded to cover Macau and, very soon, Hong Kong. The energy business portfolio of the Company has been extend to refined petroleum products in May 2012 with the commencement of operation of three bunker ships and light diesel fuel supply station in Yaumatei, Hong Kong.

Sinopec is well-repesented up and down the petrochemical chain.  Photo: Company

Net loss ballooned to Rmb961mn, more than five times the loss in Q1.

“We initiated coverage on the company with a ‘Sell’ rating in April with a 35% downside. Its share price has declined 25% thus far vs. a 4% drop versus the Hang Seng Index over the same period.

“We remind investors of our initial warning on the overly optimistic market estimate and further headwinds heading the company’s way in refining and chemical losses,” Bocom said.

The research note added that the decline of chemical prices and rising oil-based naphtha costs squeezed margins to produce a loss. 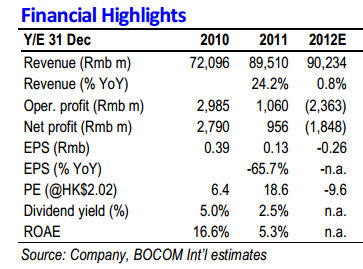 Other than the ‘petroleum products’ segment that increased 2.9% YoY, synthetic resin, resins and plastics, intermediate petrochemicals, and trading of petrochemicals all experienced a price decline of 25.6%, 12%, 9.4% and 11.9%, respectively.

“The company made a loss in every chemical segment except Intermediate Petrochemicals and a miniscule amount (Rmb29mn) in trading operations. Unlike the US and the Middle East which source ethylene production from the cheaper natural gas-derived ethane, China uses crude oil-derived naphtha as feedstock, thus driving costs up along with crude oil.”

Bocom added that the latest macro data are not the most encouraging.

“Manufacturing has remained in contracting territory for 10 consecutive months. China’s exports to Europe also declined 16% YoY in July, the sharpest fall this year.

“We recommend caution as there is currently no visibility on the eventual recovery in price and demand that would drive up petrochemical earnings.”

Bocom has a 2.00 hkd target price on Sinopec Shanghai, with the recent share price around 2.03.

9 things to know about RH PETROGAS, the largest exploration & production company on SGX

We have 1020 guests and no members online