WAITING GAME: Opportunities Galore In China! Just Not Quite Yet... 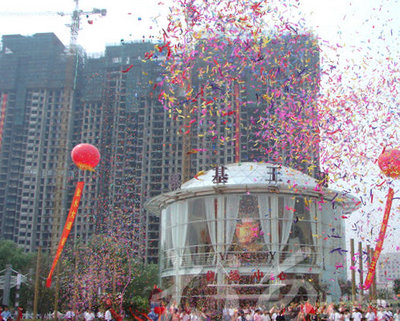 With their thirst for cash to boost landbanks, property developers are one of the biggest fans of loose credit.  Photo: Centaline

It's still too early to tell if you might be overpaying for even the most underperforming counters out there.

Yes, there are plenty of buying opportunities in China’s stock market.

The only problem is that they haven’t quite ripened yet.

A market watcher with Dongwu Securities recently said that the recent volatility of the benchmark Shanghai Composite Index was indicative of this phenomenon.

Tuesday and Wednesday were both volatile trading days for Chinese shares, with the former in particular showing excessive jumpiness.

After a relatively quiet start to the morning, banks and insurance firms – the standard bearers for the financial sector – suddenly went haywire and together dragged down the benchmark Index before noon.

A growing chorus of market watchers who say that the likelihood of a major stimulus from Beijing, or another prime rate move by the People’s Bank of China, may not be on the near-term horizon.

Naturally, this sent a shock wave through financial counters as we saw on Tuesday, and did little to inspire confidence in the near term outlook for property developers as well – one of the most cash-reliant industries out there.

This late-July/early August period is notorious for inscrutability and poor visibility.

Not only are the well-heeled executives of listed firms likely to use their annual leaves at this time to beat the summer heat in cooler climes, but the most listened to, highly respected analysts and fund managers tend to vacation in mid-summer as well.

Add to that the fact that this can be one of the slowest times of the year for most industrial plays, as Christmas orders are more or less met by now and factories in the sweltering, heavily industrialized South tend to ease back on shifts in order to save on expensive cooling costs.

Another drag on the Shanghai Composite of late has been the sharp declines in the widely overpriced ChiNext and SME board shares.

Although their combined capitalizations pale in comparison to main board listcos, members of the ChiNext – the PRC’s version of the Nasdaq – and the SME platform have seen their share prices and P/E ratios come down to earth, which also pulls down the Shanghai Composite with it.

But the most important factor which makes a wait-and-see attitude perhaps the best for shareholders at this point is the lack of visibility on macroeconomic policy out of Beijing.

If investors were given a schedule of exactly when and by how much the central bank would be adjusting interest rates or launching stimulus packages, then things would be a lot easier.

But that’s not how things work in the real world.

Therefore, investors need to remain vigilant for any signs of interim earnings surprises – one way or the other – and especially for clues on how and when policymakers are going to pry open the national pursestrings again.

Then and only then will it be safe to go after the bourse bargains full bore.

We have 2328 guests and no members online