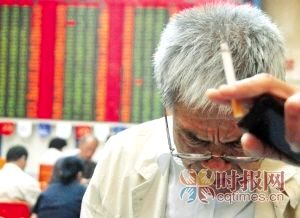 MR. SHU LING of the southwestern Chinese city of Chongqing is a "war baby."

World War One that is.

Born during the global conflict in 1917, Shu Ling has been playing the Chinese stock market as long as anyone.

So what does this nonagenarian have to say about the bourse these days?

“So the market hits a new low. So what? For newcomers to the stock and job market, this may seem like scary news. But for old folks like me, we’ve seen it all before and don’t give it a moment’s thought,” said the 95-year old Mr. Shu.

It’s 2:28 pm on a Monday, and the market is in freefall, with 100 A-share stocks frozen off from trading after they exceeded their intraday allowable falls.

But Mr. Shu is unfazed, as he keeps one eye on a nearby tickerboard and the other on his mobile device.

Having first entered the workforce at the tender age of 16 back in the year 1933 – in the heart of the Great Depression – Mr. Shu has seen it all.

From World War One to the early days of the Republic of China, to the Japanese invasion and Civil War at home to the founding of the PRC in 1949 followed by the tumult of the Cultural Revolution, he has seen the market (and country) endure gyrations that would take several history and economic textbooks to fully chronicle. 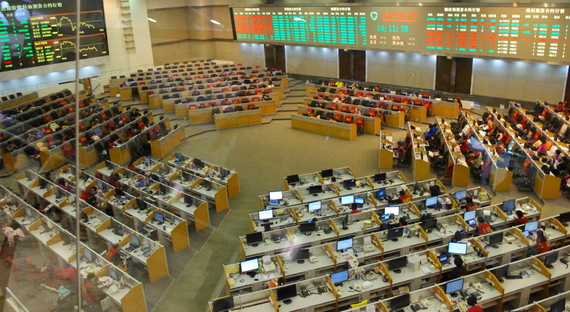 The Shanghai bourse has come a long way in two decades.  Photo: sicfledu

But through it all, he has learned over and over again one valuable lesson:

With China’s first true capital markets opening for public participation only in the 1990s, the country had a lot of catching up to do in terms of money-raising platforms for domestic firms.

Mr. Shu was “all in” from the start, and considered it a social club at first, comparing success stories and tips with his fellow 60- and 70-somethings at the time, given the relative novelty of the whole shareholding experience to Mainland Chinese around two decades ago.

But the tremendous growth of share values and the extended bull run that peaked for A-shares in 2006 brought in a whole new generation of youngsters, mainly "only children," ready to use their parent’s “allowances” to try their luck at the bourse.

Mr. Shu said things were actually a lot more simple and worry free at the outset, with growth almost a given for most newcomer firms to the domestic share markets.

The Age of Descent: China shares over the past year

However, he said that he heard that over the past two months or so, over 1,500 domestic investors are each day emptying out their portfolios and completely vacating the stock markets.

“From what I can tell from my vantage point, the bulk of those jumping ship these days are the so called post-80s and post-90s generation investors,” Mr. Shu said, referring to a common way of describing youth in China.

But Mr. Shu was holding firm, and adjusting his portfolio accordingly without completely abandoning ship.

He did admit that he sometimes had second thoughts about his tenaciousness, but he says he’s doing better than most his age.

He pointed to another investor in Chongqing, a much more “junior” investor who was born in the 1970s and first began buying stocks five years ago.

However, by contrast the 95-year old Mr. Shu had a different notion of the market, and wouldn’t let a few bears scare him away from his decades-long “hobby” of stock market investing.

Five China Sectors About To Get Hot

We have 819 guests and no members online