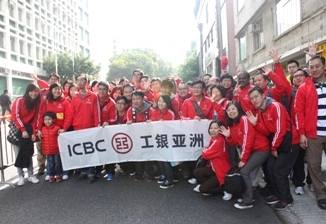 ICBC is one of rival HSBC's top picks.  Photo: ICBC

“Transaction handling charges and scrip fees will be lowered by 25% from June 1, or around three billion yuan saving (2-3% of all trading costs). This is positive for sentiment and lower stamp duty tax so we reiterate our year-end target of 2,800 for the benchmark Shanghai Composite (currently 2,438).”

The research arm of the London-based bank, which is also the largest lender in Hong Kong, added it was upbeat on market reforms initiated by Beijing.

“We view 2012 as the year of reform for China’s financial and capital markets. For equity investors, progress on reforms could serve as the anticipated long-term re-rating catalyst for the A-share market.”

The Hong Kong-listed financial institution said that since Chairman Guo Shuqing took the helm of the CSRC, he has shifted the regulatory focus from IPO approvals to market supervision and investor protection.

“From a valuation perspective, China A-share markets are still at their trough valuation on both P/E and P/B terms.

“Over the past week, the CSRC has revealed a series of policy initiatives to boost investors’ confidence on the domestic A-share market: i) lower trading fees for futures and stocks; ii) guidelines on further IPO reforms to improve disclosure and rationalize valuations; and iii) new delisting rules to improve market disciplines. These are the latest reform efforts under the new CSRC Chairman Guo for the past six months.”

The research house said first quarter profits rose between 9% and 60% y-o-y, around 25% of its FY12 forecasts.

“Pressure on NIM q-o-q and our expectation of rising credit costs in 2012 imply FY profits will be driven by loan volume. We prefer banks with more liquid balance sheets and better capitalized to drive loan growth, like ICBC and CCB, with CITIC a preferred high beta play.”

KINGS OF THE HILL: 12 Banks Produce Over Half Of All Listcos’ ProfitWhat’s Really Behind China Share Rally?Funds To Fuel Further A-Share Frenzy

We have 1066 guests and no members online