This is part 2 of our Oceanus AGM report. Part 1 was @ OCEANUS AGM: Rare case, ex-CEO voted out of board

My takeaways from the meeting: 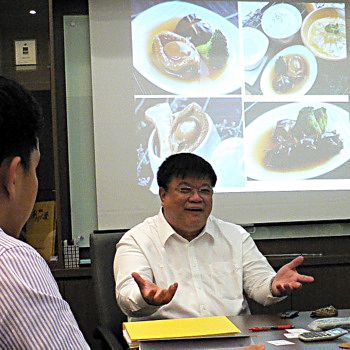 1. Strategy for recovery: Oceanus bought some 180 million juvenile abalones at the start of this year, said Dr Ng.

In October, it would be time to sell a portion of these for cashflow while the rest would be allowed to grow further.

Some of these will be sold next January/February for cashflow. Progressively, the others will also be sold while only about 10 million will be kept and grown till 2015 when they are big.

Based on current live prices in China, the 10 million could fetch RMB1 billion, said Dr Ng.

2. Looking for new CEO: Dr Ng is interim CEO while Oceanus is talking to a few candidates and will announce its choice in due course.

"The new CEO need not be mainland Chinese but he must understand farming," said Dr Ng.

(That sounded like a hint that a Singaporean would be the next CEO.)

"As for the processing plant, the investment is done. We have few abalones now. The key is we must focus on building our population to do live sale. When the abalones are big, we can use the processing plant. Now we have scaled it down -- the operating costs have been scaled down drastically.

"We now process a certain amount for a few customers by buying abalones from outside -- it's enough to break even."

4. Restructuring: In the past, Oceanus was structured like any Chinese enterprise listed in Singapore -- the CEO was a mainland Chinese national who oversaw the operations in China and the finance team (made up of mainland Chinese) there.

The restructured Oceanus, however, has a Singapore finance team which is in charge of the finance operations in China.

And whatever the nationality of the CEO, his ops team will be independent and separate of the finance team, said Dr Ng.

5. Move on: While shareholders questioned how the fiasco happened and made clear their unhappiness with the management, Dr Ng's message was: Yes, we can delve endlessly on the past and wished the operations were done differently -- but the better thing to do is to move on and to implement the changes needed to secure Oceanus' survival and recovery.

I don't see a point of going to AGM and throwing stones.

The time to question is before not after thing happened.

Last few years says, The company has very lousy results but "super" good unrealised profit which accounted for as profit that was being write off in a single fiasco event.

I don't understand why future will be so different. Question them!!!
Quote
0 #2 Kk 2012-06-05 18:39
Jj: I quote from media report as follows:" "Given that the high mortality of abalones was a 'man-made factor', Oceanus is unable to make insurance claims on the losses, he added."
Quote
0 #1 Jj 2012-06-05 15:22
I found it strange when I went through Oceanus reports. Why isn't their livestock insured at market value? I saw that they do buy insurance annually... So why didnt the insurance paid them those abalone casualty recently?
Quote
Refresh comments list
NextInsight.net

We have 585 guests and no members online