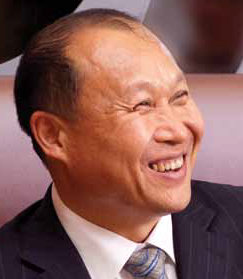 No reason anymore to smile: Yu De Hua, former CEO of Oceanus, was not re-elected to the board by shareholders.
Photo: annual report

THERE WAS clapping and cheering from Oceanus Group shareholders when it was announced that Yu De Hua had failed to be re-elected as a director of the company.

By a poll, shareholders representing more than 90% of the shareholding of Oceanus voted against his re-election.

Mr Yu, 52, a mainland Chinese national, was not present at the AGM.

His non-reelection was a rare case of a director retiring by roation and a resolution for his re-election was voted against successfully (and overwhelmingly).

In a way, the ignominous outcome was a foregone conclusion, given the anger and disappointment that shareholders expressed at the AGM towards the events that led to huge losses in the abalone assets of the group last year.

A big crowd of shareholders attended the meeting.

Many among the 8,700 shareholders on Oceanus' register have suffered heavy losses on their investment in the shares, whose price has plunged from around 25 cents last May to 6.5 cents recently. That gives Oceanus a market cap of $131 million.

A casualty is Mr Yu himself, who was removed by the board of directors in February 2012 from his position as CEO of the company and Legal Representative in China of its subsidiaries.

He, however, remained as a member of the Board and was re-designated as a non-executive director -- until his non-reelection yesterday which effectively ended his formal ties with the company.

Oceanus incurred a loss of RMB790 million due to the changes in the fair value of the biological assets for FY11.

"The loss was mianly due to high mortality rates and culling of laggards," according to Oceanus' annual report, which added that expert advice suggested a lack of nutrition compounded by husbandry problems. 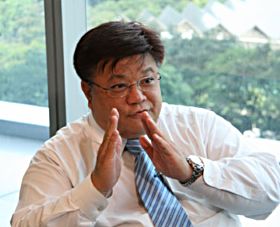 Dr Ng Cher Yew, the executive chairman is currently also the interim CEO while Oceanus looks for a new CEO.

He was asked about the possibility of legal action against Mr Yu.

"The case is ongoing. Should there be evidence of fraud, we will take action," replied Dr Ng.

A woman shareholder pointed out that Mr Yu (and Dr Ng) was paid big bonuses in the past based on the company's reported profits which arose largely from increases in the fair value of the abalone assets -- rather than on actual profits derived from the sale of the abalones.

"The remuneration was more than S$1 million a year*. This way of remunerating is unfair and very wrong. The bonuses should be clawed back from the CEO who has made a mess of our company." 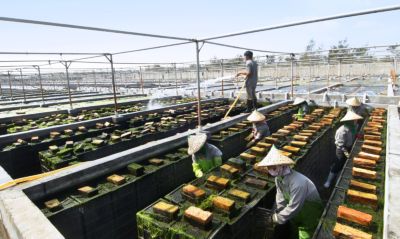 Abalone farm: Oceanus assets plunged from RMB2.3 billion at at end-2010 to RMB1.3 billion a year later due to high mortality of its abalones. Photo: Company

Mr Chua Hung Meng, an independent director and chairman of the remuneration committee, replied that his committee was reviewing the bonus issue.

"We are looking at a new remuneration package for the CEO and chairman."

He explained that the bonus payout in the past was part of an agreement that came into effect when Oceanus became a listed company via a reverse takeover in April 2008.

Look out for Part 2 of our Oceanus AGM report next week.

0 #8 Jo Leng 2017-05-02 23:16
According to what I had seen from the video, the system is out dated farming system. In order to re salvage this abalone company, all the system have to be redesigned into a hi tech abalone aquaculture system. May God bless this company! Marine Biologist Jo.
Quote
0 #7 8709 2013-08-04 07:08
the price is over-valued at 0.03c. actual valuation is 0.01c.
Quote
0 #6 Being tied by oceanus 2012-06-06 10:50
What I can say is that the current team has poor organization skills, lack of good leadership from the management and poor coordination between management and the ground people.

The management does not have an emergency plan to curb the lost of the abalones. They do not have the “what if” attitude inside them. And I believe this is not their first year in the business.

Regrettably, the lack of foresight from the company has brought to today’s disaster.
Quote
0 #5 Landowner 2012-06-02 17:11
Hahaha Tintin: How can be zero? The company has real assets including extensive land which has appreciated in value. It is not raw land -- it is land that is developed for abalone farming and is equipped with tens of thousands of tanks.
Quote
0 #4 Tintin 2012-06-02 11:04
As a shareholder,I am worried....is the price going to be zero?
Quote
-1 #3 Low Cze Soo 2012-05-31 19:11
As a concerned shareholder, I am surprised by the lack of attention to the operational demands of the business as well as the lack of good corporate governance and lack of segregation of duties and its accountability.

It is a business similar to the fish farming we see in Singapore and elsewhere. I urge the management to learn from them and adhere to strict security and farming matters. To me, a lot of common sense, hard work and dedication are required to make this business a continuing success.

Going forward, let us support and wish Dr Ng and his team success. Over time we should see shareholder value improving, as he has rightly pointed out.
Quote
0 #2 Tomique 2012-05-31 09:09
I attended the AGM yesterday, and was encouraged that Dr. Chew has assured changes to be made and inviting some experienced abalone farming African to provide some guidance. Hope it turns out to be good for the company.
Quote
0 #1 Bopanha 2012-05-31 09:08
I won't be selling. Will give the " new management" the benefit of doubts that they will fail. But of course big business is sometimes very hard to run profitably as with most SGX listed companies. But this business actually is a simple business and it only needs care and prudence in running it to be successful.
Quote
Refresh comments list
NextInsight.net

We have 407 guests and no members online