Details
Written by The NextInsight Team
Published: 18 May 2011 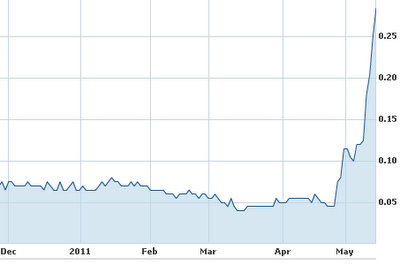 ARTIVISION TECHNOLOGIES' shares have sizzled in the past three weeks – surging from 4.5 cents to 29 cents this morning.

Its market capitalisation has accordingly soared, from $22 million to $138 million.

The run-up had been fuelled by speculation that it had developed an app for Facebook which will enable users to insert ads into their videos. This allows users and advertisers to monetise the ads, and Artivision gets a cut.

As the stock surged, Artivision issued a statement on May 12 to the Singapore Exchange saying “in the course of its business and as part of its marketing strategy, the Company, in particular its Media Solutions Division, constantly engages in commercial discussions and integration talks with a large network of current or potential partners and customers including operators of some of the biggest social network sites in the world to offer our technology in the monetization of their assets.

“We may also as part of our marketing efforts, offer preliminary no obligations trials to our potential customers. As at the date of this announcement, the Company has not entered into any legal agreement that would require disclosure in accordance with the SGX-ST Catalist Listing Rules.”

Just three days later, on May 15, Artivision had big news.

It said it had released a social-media application, Advision, which “empowers people engaged in social website(s) with the ability to generate revenue from their online content.

“With Advision, users can upload their own videos to their Facebook page on their computers and be paid for each view. Advision displays advertisements on users' content, and splits the advertisement revenue directly with the users. For the first time, users can receive money for content they upload to social media site(s). We have uploaded this application into Facebook.”

The company added it had not entered into any commercial contract with Facebook at that point of time.

In yet another surprise to the market, Business Times on May 16 published an article stating that:

(1) CEO, co-founder and chairman, of Artivision Philip Soh said the company had inked a deal with Facebook to enable millions of netizens to use the advertising software with their online video postings; and

(2) Company officials say the Facebook deal is just the first of numerous deals it will seal with other social website operators.

However, that same evening, Artivision issued a statement clarifying that “it has not entered into any commercial contract with Facebook nor any other social website operators as at the date of this announcement.”
Oh well.

Listed in August 2008 at 20 cents, Artivision reminds one of the dotcom era where companies without earnings became the darlings of the market because of their perceived potential to rake in big bucks one day.

In the meantime, their stock valuations soar to the stratosphere. Aside from not having any PE, at 28.5 cents, Artivision trades at 713x its net asset value of 0.04 cent.

It has not paid a dividend since its listing and has been loss-making too. From a net loss of $3.6 million in FY08, it chalked up $7.5 million loss for FY10.

Kim Eng Research analyst James Koh wrote this morning that the company is likely to need new capital in the form of equity/loan in order to ensure an adequate level of working capital.

“Alternatively, it is not inconceivable that an Internet giant like Google or Facebook could choose to buy out the company for a premium. These two companies alone have made at least 70 acquisitions in the past four years, ranging from advertising to gaming.”

We have 678 guests and no members online