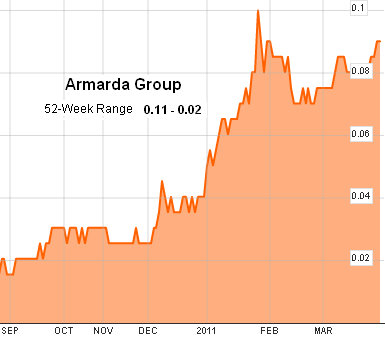 FEW, IF ANY, Singapore-listed shares have shot up as much as 200% in the last six months – but Armarda Group has done it, surging from 3 cents to 9 cents.

This despite Armarda, with a market capitalization of S$97 million, having been loss-making in the past two years, suffering HK$110.5 million and HK$118.9 million net losses in 2010 and 2009, respectively.

And it is relatively unknown - but maybe not for long.

The news yesterday pointed to Armarda transforming its business model (from being an IT and professional service provider to China’s banking and financial services industry) into a higher profile one.

HK-based Armarda had alluded to this big deal back in Dec 2010 when it was still in the midst of negotiations.

Now, it has specified that it has concluded a sales and purchase agreement to acquire a 45% stake in China Mobile Satellite Communication Group (CMSCG).

The 3 leading mobile operators in China – China Mobile, China Unicom and China Telecom - do not possess the license.

The mobile satellite communication sector in China is in its infancy and could grow rapidly.

Terence Luk, CEO of Armarda, said: “There are many potential customer groups such as National Civil Defence Emergency System and National Civil Affairs Ministry Earthquake Disaster Mitigation Network who will be interested in the services that we offer. Other industries like the marine and offshore industry will also require our mobile satellite communication services to maintain communications.”

He added: “Being the only qualified mobile satellite communication operator in China, CMSCG has immense potential to develop into a major player in China’s telecommunication industry.”

The amount will be payable in HK$25 million cash, issue of HK$20 million in loan notes and the issue of 920 million shares at 7.5 cents each.

Armarda also has the option to buy the rest of the 55% stake for S$104.9 million via the issue of 1.28 billion shares, payment of HK$25 million cash and the issue of HK$30 million in loan notes.

As it seeks to develop new business, Armarda says its core IT business is facing strong headwinds.

"The overall market condition of the PRC IT industry where Armarda operates becomes increasingly competitive and remained very difficult since the last reporting period," it said in its FY2010 results announcement.

"The management expects that such condition will not be improved in the short term which will lead to a continuous downturn of the financial performance of our core business."

We have 338 guests and no members online