Armarda, which provides IT services, first announced its intention to buy the stake in CMSCG back in March.

Six months later, on September 29, Armarda added a “supplemental agreement”, stating that the stake will be financed by: (i) the issue and allotment of Consideration Shares; (ii) payment of 25 mln hkd Cash Consideration; and (iii) the issuance of 20 mln hkd Loan Notes. 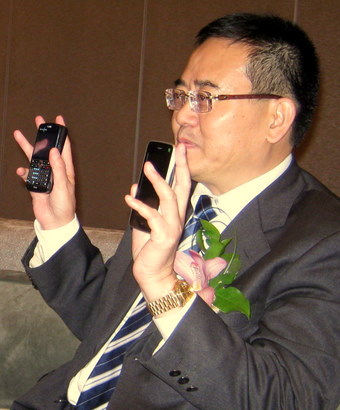 "We don't look upon traditional mobile phone networks or hardware as competitors as we share alot of the same clients. In fact, we see both platforms growing in a complementary fashion," said Zhang Jianhua, CEO of SJSC.  Photo: Andrew Vanburen

The three parties are targeting over 300,000 subscribers to the new service within just three years, which will combine mobile satellite products and services with existing ground mobile communications networks.

CMSCG is the first supplier to provide satellite voice and data communication services legally in Mainland China, and says the deal will help tap the “vast potential” mobile satellite communication market in China and the Asia Pacific area.

According to the agreement, the three signatories will provide customized mobile satellite communication services to both institutional and individual customers.

CTGSC will be tasked with obtaining relevant operating license approvals for the provision of the Thuraya satellite mobile communications services in the PRC from the appropriate government authorities, and for promoting and selling the related mobile satellite communication services.

Meanwhile, CTGSC also pledges to sign up no fewer than 300,000 subscribers within three years.

CMSCG will be responsible for the negotiations with Thuraya to secure the related legal documentation signifying the continuous exclusive control of the Thuraya-3 transponder resources in China within six months after the effective date of the agreement.

Finally, SJSC -- as the exclusive company owning satellite landing permission in China -- will be responsible for the regulatory approvals for the use of required necessary frequency coordination for Thuraya-3.

“Moreover, the cooperation with CTGSC will provide extensive and mature sales networks for our future launch of mobile satellite products and services. We believe the promising prospect of China’s mobile satellite market will bring enormous profitability to the Group."

Mr. Zhang, who also serves as CEO of Shanghai Jianhua Satellite, said the trio's exclusive licensing position in the region and cutting-edge technological advantage will allow it to enjoy strong pricing power at the outset.

"We will not have standardized subscriber pricing mechanisms at first, but instead will provide different 'service packages' to both institutional and individual clients," he told NextInsight on the sidelines of the signing ceremony.

He said the market knew virtually no bounds.

“As the largest CDMA operator in the world, the mobile subscribers of China Telecom have exceeded over 100 million, among whom are high-end users spending more than 600 yuan per month. The number of subscribers in that category is between two and three million. According to an AC Nielson report, the potential demand of satellite plus CDMA dual-mode mobile phone is over 300 million subscribers.”

Once the agreement comes into effect, CMSCG and CTGSC will jointly prioritize the development of CDMA network dual-mode satellite mobile communication services business and expedite the development of other ground mobile system dual-mode satellite mobile communication services business as soon as market conditions become mature and suitable, so as to expand the business to other Asia Pacific countries.

And the firm’s pioneering work in mobile satellite communications has both rivals and peers knocking at their door.

“A lot of companies are interested in buying us,” he said, when replying to a reference to current suitor Armarda. 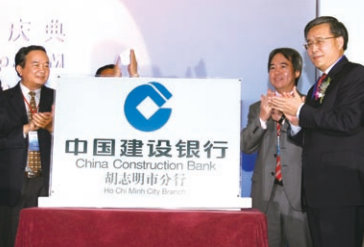 Armarda's strength in the past has been providing IT services to major financial institutions in China like China Construction Bank. Photo: CCB

He said CMSCG and Shanghai-based SJSC were both keenly aware of the rapid economic growth of Mainland China's economy and the accompanying expansion of the country's communications and transportation networks.

Specifically, he said the three parties to the agreement were very encouraged by the exponential increases in air travel and airport construction in the country of late.

"Our mobile services will be compatible with in-flight regulations and will be fully authorized for use among airline passengers. We consider this a very substantial growth sector," Mr. Zhang said.

He also said users of the new mobile satellite service will enjoy more peace of mind from a security standpoint.

"The service we will offer will be very safe, and much less susceptible to hacking than current options."

Mr. Zhang added that the complex and comprehensive three-party deal is expected to be fully in place by the first half of next year.

In addition, he was not at all wary of potential competition from existing communication platforms.

"We don't look upon traditional mobile phone networks or hardware as competitors as we share alot of the same clients. In fact, we see both platforms growing in a complementary fashion."

We have 930 guests and one member online