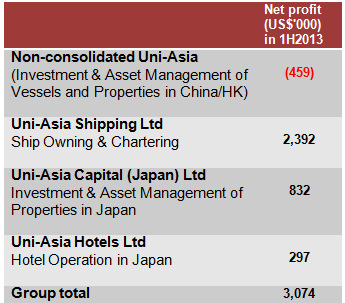 THE BALTIC DRY INDEX has risen over 60% since the start of the year, signalling improving ship charter rates after a deep slump.

Ship prices are on the rise too. (See Bloomberg article: Ship Values Rebounding Most Since ’10)

Having identified the shipping sector as its main growth driver, Uni-Asia Holdings on 25 April inked deals to acquire three new 37,000 dwt handysize bulk carriers, which will be delivered from 2014 to 2016.

This will expand Uni-Asia's fleet to 8 bulk carriers and boost its charter income in the years ahead.

(In addition, Uni-Asia and its substantial shareholder, Yamasa, have announced that they have taken stakes in 2 investment companies that will acquire 2 bulk carriers -- 58,000 dwt Supramax vessels - for delivery in 2015.)

Uni-Asia is not done yet expanding its fleet. "We are in discussions with Japanese shipyards for additional vessel orders," said the Chief Operating Officer, Michio Tanamoto, at a results briefing last week.

Note that the fifth vessel started contributing only from June 2013.

Two of the five vessels in its current fleet are on 1-year charters, so charter income would rise if rates are higher than current chartered rates when the charters are renewed next year, said Mr Tanamoto.

The other 3 vessels are on multi-year time charters expiring between 2015 and 2018. 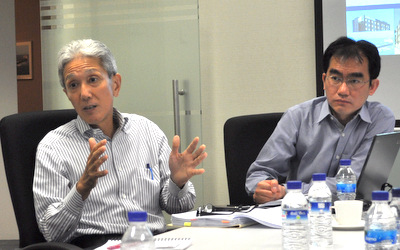 a. Non-consolidated Uni-Asia: This showed a loss of US$459,000 in 1H2013, partly because it recognises the headcount and expenses of the staff of the shipping and property segments in Hong Kong and Singapore.

Uni-Asia Holdings has a 10.2% interest in an office building redevelopment project in Hong Kong from which UOB Kayhian expects US$1-2 million of profit to be recognised in 2H of this year as the project has just been completed.

Mr Tanamoto said the company is seeking property-development opportunities not only in HK but other parts of Asia.

b. Uni-Asia Capital (Japan): This is the arm that invests in property development and asset management in Japan.  It will be completing two small residential projects in Tokyo in 2H of this year and another two projects early next year, said Mr Tanamoto.

It has another four new projects, which will take about nine months to complete. Target: by the end of next year.

Typically sited on land of 2,000 sq ft, such projects are of 4-5 storeys and offer studio apartments of 200-300 sq ft, which are even smaller than the shoebox units in Singapore.

When completed, the projects are either sold or leased out.
c. Uni-Asia Hotels: It operates a chain of 10 hotels in Japan, which turned profitable in 2Q with a US$429,000 net profit, thanks mainly to higher occupancy and average room rates.

Uni-Asia stock, trading at the 19-cent level recently, is at a steep 48% discount to its USD29 cent NAV, providing a margin of safety for value investors.

We have 353 guests and no members online