High-speed railroad themed plays were hit by recent mishaps and delays in the massive project.  Photo: Ministry of Railways

SPRING IS USUALLY a time of renewal and hope.

But 204 Chinese listcos – or just under 10% of the 2,111 total listed firms in Shanghai and Shenzhen – are not feeling any spring in their step.

This batch of listcos has already warned on potential downturns for the first quarter.

The beginning of the January-March quarter reporting season officially gets underway on April 10 for Shanghai- and Shenzhen-listed enterprises.

But already these 204 listcos have issued profit warnings, pointing to anything from downside effects from new debt, to overleveraging from recurring debt and less-than-anticipated revenue growth.

Much of the blame for the rash of listed firms warning about weaker-than-expected first quarters can be placed on disappointing progress to the country’s bold rail system expansion. 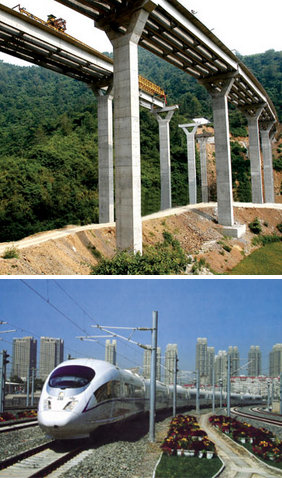 By the middle of last year, Mainland China already possessed the most extensive high-speed real (HSR) system, approaching nearly 10,000 km in total track length, with over a third of this with top speed of 300 km/hr.

And at the time, many analysts were expecting the PRC to have more HSR tracks than the rest of the entire world combined.

But then came a series of accidents, mishaps, delays and expensive safety overhauls which took a lot of the steam out of the massive program’s momentum.

And as can be seen from the partial list of firms below, those with even a slight exposure to the country’s rail network expansion have been hit especially hard.

We have 471 guests and 3 members online