SING HOLDINGS: Stock price is no reason for shareholders to sing

AT THE UPCOMING annual general meeting (Wed, April 18), shareholders of Sing Holdings may sing the praises of management for more than doubling its net profit in 2011 to $22.1 million.

They may also pour out their grievances over the immobile stock price -- and ask the management of the boutique property developer if it will, finally, try to do something about it.

Such questions and related comments have been posted by long-suffering shareholders of Sing Holdings (market capitalisation: S$132 million) at an online forum, Valuebuddies.com

Sing Holdings has about 3,000 shareholders, with the largest stakeholder being FH Lee Holdings holding a 34% interest. It is the investment vehicle for various Lee family members, including the chairman and CEO of Sing Holdings.

(If any reader attends the AGM, please share your observations in the "Your Comments" box below.)

The Bloomberg chart below is most telling: The stock price movement has been pretty flat since Sept 2009 -- so, it was not brought down to its knees in the Oct 2011 eurozone crisis nor did it sing a high tune during the market rally at the start of this year.

It's understandable why the value investors who are into the stock are wringing their hands.

The stock recently closed at 33 cents, a substantial 54% discount to its RNAV of 71 cents a share (as estimated by Kim Eng Research in a June 2011 report). 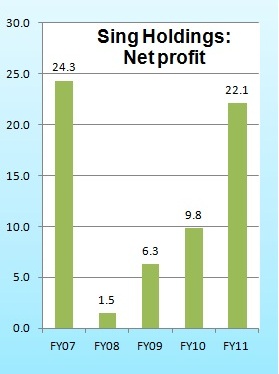 "Even though the company is doing well year on year, what did the minority shareholders gain from it? If the management feel that the company does not need join the SGX research scheme to gain more coverage or share buyback, what options do they have in mind? Or no other plans but just continue as usual......

"If mgmt claimed that last year share price was affected by the Euro Crisis, what about Oxley, Hiap Hoe, Roxy, Aspial and etc.....why are the share price up and not Sing Holdings?

The higher bonuses are related to the profit jump in 2011, of course. Sing Holdings has enjoyed the fruits of a strong property market of recent years, as the table above depicts.

With the government measures to cool the feverish sentiment in the property market, could Sing Holdings be facing a dim outlook?

Far from it, as Sing Holdings has a major project, The Laurels at Cairnhill Road, which is substantially (94%) pre-sold and a large chunk of revenue and profit will be recognised this year and next. 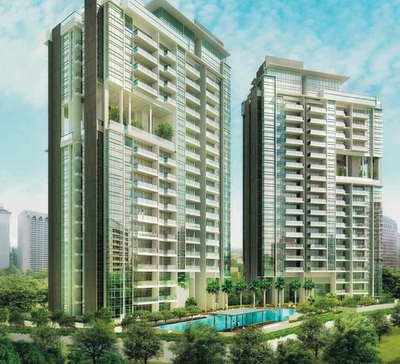 “Approximately S$472.8 million of balance progress billings will be progressively recognised as revenue from FY2012 to FY2013,” said Sing Holdings in its FY2011 results statement.

Taking a simple average, the revenue from The Laurels would be $236.4 million in each of the two years -- which is a relatively massive figure.

Better yet, indications are that The Laurels has excellent profit margins for the developer.

Sing Holdings derives revenue largely from development properties, with a small contribution from the rental of the 60 units it owns in BizTech Centre, a freehold light industrial building.

Perhaps a weak point about Sing Holdings is that it doesn't have a large landbank or a slew of new projects -- in fact, it has just one currently.

It is expected to be launched this year and targeted for completion by 2015 to coincide with the completion of the Stevens Road MRT station.

While shareholders who have held Sing Holdings stock for a long time may be unhappy with the lack of capital gain, the stock could well be a bargain for investors to enter at this time.

Aside from NRA Capital, Sing Holdings appears sporadically - in favourable terms as an undervalued stock - in various other analysts' reports. Trouble is, no analyst consistently covers the stock.

This is a constant grouse of some shareholders, in addition to the fact that Sing Holdings has not engaged in corporate share buybacks. Such action does not guarantee a firmer stock price, though, as not a few companies have discovered.

Sing Holdings insiders, mainly the CEO, do buy shares for their own accounts from time to time, which itself is a positive signal that the stock is undervalued.

The most recent would be CEO Lee Sze Hao's purchase of 1.356 million shares just last month (March) at an average of 33.9683 cents a share.

High end properties stocks are not moving eg. SC global cause no sales !
Quote
0 #1 Property_Gal 2012-04-16 07:52
Roxy-Pacific has touched 70.5 cents today. It's almost 100% up in year-to-date (started at 38 cents). Will Sing Holdings be one day recognised in a similar way too?
Quote
Refresh comments list
NextInsight.net

We have 705 guests and one member online