REX INT'L: Up 10% on upbeat analyst report, 1H production stoppages are over 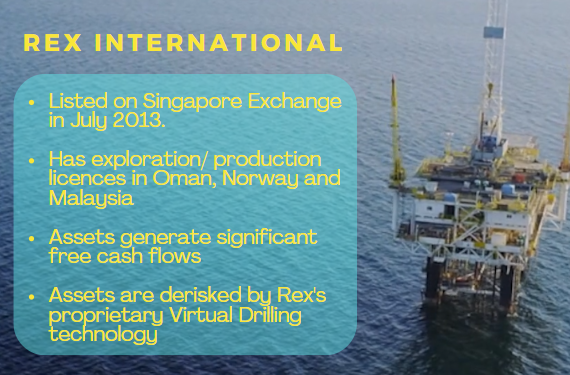 Rex's 1H2022 results were impacted by production stoppages in its Oman asset.

Net profit attributable to shareholders fell 80% y-o-y to US$4.8 million (or US$6.0 million before minority interests). Rex said the drop was mainly due to:

The production issues in the Yumna Field -- the key revenue generator in 2021 -- are behind it now.

Yumna Field saw production stoppages for planned major change-outs and upgrades made to the production facilities from February 2022 to April 2022 and unforeseen operational issues in June 2022, according to Rex.

Production has been restored in Yumna Field which "will be able to handle increased production from future new producing wells planned," said Rex.

"In our view, the Company now needs to restore investor confidence in the production base as it focuses on paying a quarterly dividend and sets a near-term production target of 20kboe/day," said SP Angel.

Starting from 1Q23, Rex plans to pay a regular cash dividend at the target level of 0.5 cent/share per quarter (7.1% implied yield based on 28 cent share price).

We have 1489 guests and no members online