Rex International shares closed today on a high note at 43 cents, as the price of oil shot up to as high as US$111 per barrel on the possibility of a supply shock arising from the Ukraine crisis. 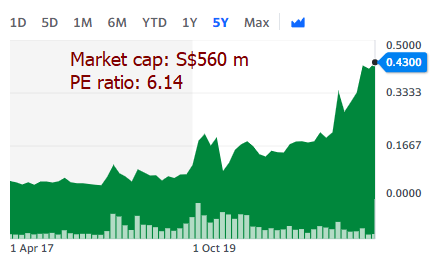 For FY2021, Rex realised oil price of US$67 per barrel on average, in comparison.

The current circumstances present an opportunity for Rex:

Rex International recorded revenue of US$158.44 million in FY21, mainly from subsidiary Masirah Oil Ltd’s share of the produced oil after the Oman government’s take.

A summary qualified person’s report on the Yumna Field dated 24 February 2022 states that as of 31 December 2021, the Yumna Field had produced 5.772 MMstb of oil. There are also estimated 15% more in 2P reserves, meaning that the field will be in production longer than originally anticipated.

“Our 91.65 per cent subsidiary Lime Petroleum AS’s acquisition of a 33.84 per cent in the producing Brage Field for US$42.6 million was completed on 31 December 2021, for which US$18.24 million was booked as a bargain purchase of oil and gas properties by way of accounting treatment. Production from the Brage Field of estimated 3,440 barrels of oil equivalent per day net to Lime Petroleum will contribute to the Group’s operating revenue and profit from 1 January 2022.

"Net 2P Reserves of about 7.3 mmboe from the Brage Field will also be added to Lime Petroleum’s current attributable 2C Contingent Resources of 27.7mmboe. Our producing assets in Oman and Norway, coupled with a strong oil price, bode well for an equally strong 2022,” Mr Broström added.

"The current level of oil price and market demand for oil make investments in production and reserves highly attractive if cash flow can be realised in the near term. Such investments, if successful, will further substantially increase shareholder value.

The Company therefore has decided to use more of the Company's free cash flow on such near-term investments like our Yumna Field in Oman and Brage Field in Norway.

For this reason, the Board is recommending a final dividend of S$0.005 per share for FY2021, payable in the fourth quarter of 2022.

The Board may consider paying an interim dividend, subject to the Company’s performance based on the financial results for 1H FY2022.

We have 2583 guests and no members online