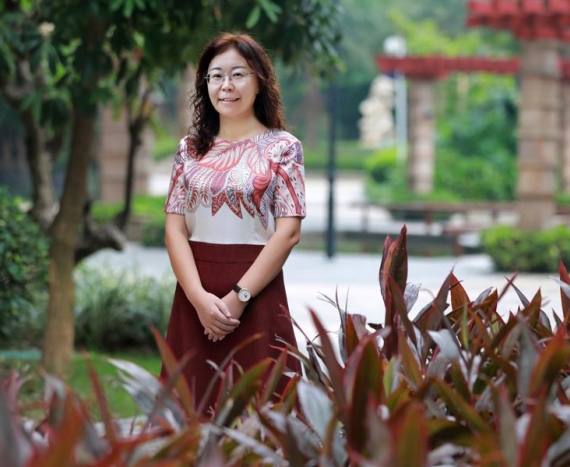 Wang Qiu was appointed CEO of the trustee-manager of Dasin Retail Trust in March 2020. Photo: Company

This was an improvement from June’s 9.5% YoY drop in turnover rent. Turnover rent is used as a proxy for tenant sales as Dasin does not disclose this metric. MoM, turnover rent recovered from January through June (Figure 2).

But as monthly turnover rent was also not disclosed, we rely on 3Q20 cash revenue to gauge the recovery in tenant sales.

The steady recovery in their tenant sales is encouraging and may return confidence to tenants who have been delaying their renewal decisions.

They are the mall’s primary catchment. The mall is the smallest in Dasin’s portfolio, accounting for 4.14% of its 9M20 revenue. The rest of its malls sustained high occupancy of above 95%. The property manager will use this period of weaker leasing to refine its tenant mix and reposition mall offerings.

This was terminated on 8 November 2020 as the department store struggled financially. Zhongshan Dasin Metro-Mall Merchant Investment Co. Ltd., an interested party of the Trust, will be leasing the space for a year at similar rents as Superior.

AEI will be undertaken over the next year to carve up the space into smaller sections. The work will be done progressively so as to minimise disruptions to operations.

Typically, conversion from single tenancy to multi-tenancies will allow the landlord to charge higher rentals as discounts are usually given for larger spaces.

Department stores are struggling. Hence, while the pre-termination of such a long lease reduces income visibility, Dasin has the opportunity to recalibrate and enhance the mall’s offerings.

Dasin last completed AEI at the Ocean Metro Mall in 2Q20. This similarly involved carving up sizeable space. In a bid to enhance the mall’s competitiveness, the Trustee Manager had commissioned a market research study and negotiated the early termination of a 9,085sqm lease with a “furniture and finishing” tenant.

The space returned was dissected and leased out to tenants providing goods and services for children.

Rental reversion was 42.9%. About 2,500sqm of space has been leased out to a children’s playground operator, with the remainder leased to children’s education and enrichment tenants.

China intends to develop its Greater Bay Area into a booming financial hub under its 13th 5- Year Plan in December 2016.

Up-and-coming financial exchanges will be located in Guangzhou (for carbon-emission futures trading) and Macau (a NASDAQ-like market for start-ups). With this transformation, the population in Greater Bay Area is forecast to grow by 43% over the next 15 years, to 100mn.

All seven of Dasin’s malls are located in the Bay: five in Zhongshan, one in Foshan and the last in Zhuhai. All are within a 1-hour traffic radius of Greater Bay Area cities.

As Tier-2 cities, they provide affordable housing to surrounding Tier-1 cities like Guangzhou and Shenzhen. Zhongshan is primed to benefit from its location at the mid-point of the Bay as well as the Shenzhen-Zhongshan bridge which is under construction.

When completed in 2024, the bridge will slash travelling time between the two cities from one hour and 15 minutes to 30 minutes.

Only 4% of its leases by GRI are on pure turnover terms.

About 20% are structured as the higher of base or turnover rents.

We have 291 guests and no members online