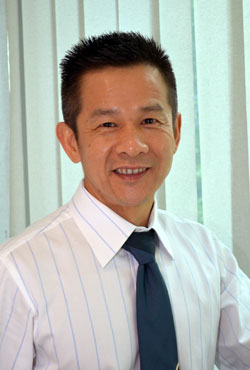 CEO Wong Teek Son.
NextInsight file photo.Granted that there is some merit to the above. However, is the 32% fall justified given that it is cheaper than its industry average based on FY21F PE?

For this write-up, besides sourcing information from the usual sources, such as analyst reports; news articles etc, I have the fortune of speaking with Mr Wong Teek Son, Executive Chairman, Co-founder, and CEO of Riverstone for a 1-1 discussion last Thurs.

Insights from discussion with Mr Wong are in italics.

Readers can refer to the website HERE for Riverstone’s analyst reports.

2. Demand is still in favour of glove makers
According to US-based Allied Market Research, global disposable gloves market may soar almost 3x from US$6.8b in 2019 to US$18.8 b by 2027.

Furthermore, based on an article on CNA dated 4 Sep 2020, Top Glove mentioned that demand continues to be strong with order backlog stretching to nearly 600 days, compared with a normal delivery time of 30 to 40 days.

3. ASPs continue to rise across the board
In a UOB Kayhian research report on Top Glove dated 4 Sep 2020, the analyst believes that Top Glove's ASPs may increase 30% month on month (“mom”) from Sep to Oct (as opposed to 10% mom), followed by an additional 5-10% mom till year- end.

For Riverstone, based on my understanding, it has raised the ASP for its healthcare gloves 10% every month from June to Oct 2020 (both months included).

Given such increments, it is likely that the ASP for its healthcare glove segment may increase by around 50% quarter on quarter in 3QFY20F.

This is more than what was reported in a CGS-CIMB Research report dated Aug 2020 where Riverstone's ASP for its healthcare glove segment was projected to increase by around 25% quarter on quarter in 3QFY20F.

Furthermore, it is likely that ASPs should continue to remain elevated till at least 1QFY21.

For cleanroom gloves, Riverstone has hiked its ASP in Jul 2020 and hiked it again in Sep 2020 by a greater magnitude than July.

4. Attractive valuations relative to industry average
Based on Table 1 below, Riverstone trades at an attractive 14.1x FY21F PE as compared to its peers which are trading at an average 15.6x FY21F PE.

5. Bonus and dividend in the near term

Secondly, on 18 Aug 20, Riverstone announced that it is proposing a 1:1 bonus share with the aim of increasing the accessibility of investing in the Company to more investors, thereby encouraging trading liquidity and greater participation by investors and broadening the shareholder base of the Company.

This bonus issue is pending the approval of Shareholders at an extraordinary general meeting (“EGM”) to be convened and the approval from SGX. A circular for the EGM will be sent out to eligible shareholders in due course.

Based on my understanding, one single line has already been commissioned in Jul 20 with one double line being commissioned every month from Aug to Dec 2020. This will raise Riverstone’s annual capacity to 10.4b pieces by end 2020.

Construction for Phase 7 of the Group’s expansion plans has started, and will add capacity of up to 1.4b pieces of gloves per annum by FY21F. Based on my understanding, the first line for Phase 7 is likely to start commissioning in Apr 21. 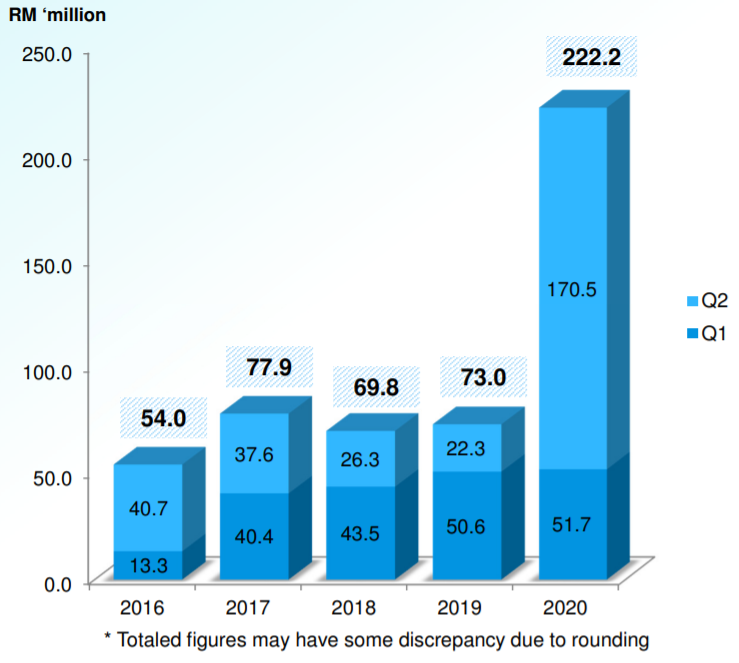 That translates to an annualised dividend yield of 2.5%. (I used average consensus net profit from CGS-CIMB, DBS and UOB and a SGD-MYR exchange rate 3.045)

9. Wind fall tax unlikely in the near term

A CGS-CIMB Research report on the glove sector dated 18 Aug 20 said that after their checks with Malaysian Rubber Glove Manufacturers Association (MARGMA), there has been no discussion with the government on the topic of windfall tax. Hence it may not be likely that a windfall tax may be imposed on the glovemakers in the near term.

In view of the above points, I believe the recent 32% fall in Riverstone is not justified.

Nevertheless, it may take some time for the market to digest the recent placement; shaky market conditions etc.

Readers should be cognisant of the pros and cons in owning Riverstone shares and should exercise due diligence and independent judgement.

P.S: I have previously informed my clients on Riverstone. I am vested. Readers please visit Riverstone’s website HERE and do your own due diligence. Investments carry risk and its best to be familiar and comfortable in what you invest in.

This article was originally published on Ernest Lim's blog

We have 282 guests and no members online