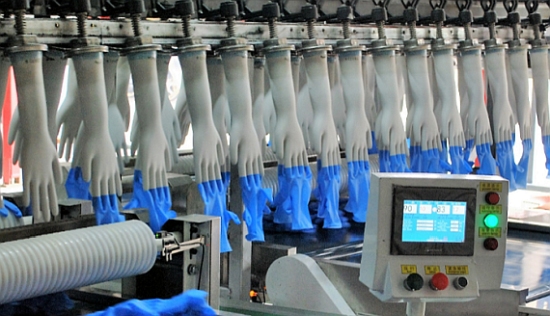 VIP Gloves operates out of a factory in the Malaysian state of Selangor.
Photo: Company

As glove manufacturers surged forward, one peer, VIP Gloves, listed on the ASX, sports a market valuation of A$60 million or so.

It looks relatively small. Interestingly, it has shot up 144% in the past 4 weeks.

Unlike its peers, VIP Gloves failed to capture investor attention early during the Covid period.

In recent years, it was a struggling business, and thus didn't have an investor following, let alone analyst coverage and fund managers' interest.

1. Poor financial performance: VIP Gloves has been loss-making for each of the past five years.

It was effectively dormant for many years as an investment company until it acquired, in Jan 2016, a Malaysian producer of roller conveyor chain systems and components which service the glove manufacturing industry.

The performance of these two business segments were reflected in the results of the past three financial years (ending June):

Losses soared in FY2019 to A$4.8 million mainly because of one-offs (such as impairments) of A$2.6 million relating to its conveyer chain parts manufacturing operations which have since been discontinued.

The question of whether it is a going concern was raised in its 1HFY20 financial statement.

Reason: Its current liabilities exceeded its total current assets by $3.8 million as at 31 Dec 2019.

Two new lines were commissioned in mid-2020, which brought the capacity up to 620 million.

For perspective, Riverstone’s capacity is 10.4 billion, and UG Healthcare’s, 2.9 billion.

3. Weak operating leverage: In a business where volume matters, VIP Gloves' production capacity could not capture significant economies of scale.

4. Listing in faraway Australia: It is listed on ASX, far from its home base of Malaysia where its peers command rich valuations (from adoring investors who are familiar with management and the businesses).

In the past 12 months, up until 8 July 2020, VIP Gloves' stock price was going nowhere (except for a brief spike in April following a positive business update) with little or no trading.

Still, a rising tide lifts all boats: The surge in global demand for gloves is benefitting VIP Gloves, and investors have just wokened up to it, going by the stock price movement.

The company's market valuation is around A$60 million on a A$0.08 share price and 745 million share capital.

Leading to this, there have been positive factors at play, including:

2. Overflowing orders: Its orderbook is filled till June 2021, said the company in another update on 24 June 2020.

3. Margins expanding: With average selling prices rising, the company is likely enjoying positive operating cashflow and profits. In addition, VIP Gloves is likely to be having it real good through lower raw material costs. 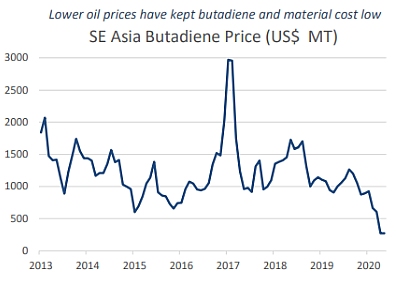 Source: Phillip SecuritiesButadiene is the key raw material and its market price has more than halved since the start of 2020.

Generally speaking, butadience accounts for about 50% of total costs in the making of gloves. (See: Butadiene market looks set to stay historically weak for rest of year)

4. Capacity expanding: The company said it will add another 4 production lines over the next 18 months, raising its annual capacity to 1 billion gloves.

That’s a more respectable figure but won't imply an operating leverage that will yield profit margins approaching anything that the big boys like Top Glove enjoy.

VIP Gloves estimated that the total capital expenditure for this expansion is about A$6.5 million.

Likely, raising funds has become easier. The company placed out 76.5 million new ordinary shares in June 2020 at 3 cents a share to raise A$2.3 million for two new production lines.

There will be further cash inflow of A$10.3 million when a sale and leaseback agreement is completed (by 3 Aug 2020) involving land and buildings of VIP Gloves in Malaysia.

We have 629 guests and no members online